The Morita Shouji company has produced a very unique line of kaiju related figures. Instead of making them out of plastic, like Bandai, these figures are made of wood.

Just like the miniature Godzilla figures that were released in 2004 to celebrate the monsters 50th birthday, these figures are hand-crafted with super detailing.

Do you want one? I certainly do, only one problem, these babies come with a very hefty price tag due to the very limited number that will be produced. 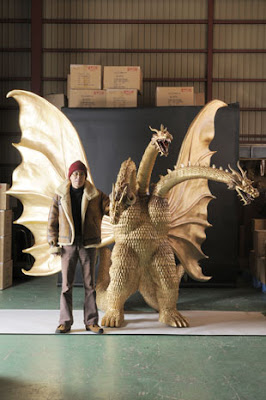 The figures in this line start at $3,000 each. In fact that is the price for the smallest Godzilla and Mothra figures. The most expensive is the King Ghidorah figure, which stands 260cm high and weighs 150kg. You can take one of those home for $23,000.

Morita Shouji is only producing 20 of each different figure, which includes Rodan, Anguirus, Godzilla and Mothra. So if you are a completest, then you may have to get another mortgage on your house to own the entire set.

If you are lucky enough to be a rich Japanese monster movie fan, then you can click on the banner below to browse through the most expensive line of Godzilla related figures ever produced!

Note: The wooden figures are only for sale in Japan, but it has been mentioned that the company would ship outside the country.....for the right price.

See Also: Rare Video - Haruo Nakajima Puts On The Godzilla Suite One Last Time For Magazine Shoot / Toho Is Renting Out Godzilla And MechaGodzilla Movie Costumes / Yumiko Shaku Looks For love At The Blood Bank / Godzilla To Add His Fire To Hot Atlanta / Godzilla Vs The Netherlands / You Can Do Anything But Lay Off Of My Kaiju Shoes / Haruo "Godzilla" Nakajima Turns 80 /King Kong, Godzilla And The Creature From The Black Lagoon At The Rose Parade / The Top Ten Hottest Monsters Of 2008 / Godzilla Rodan Ultraman And Mothra Invade The Miami Beach Art Scene / James Morrow Satirizes Hollywood, Secret Goverment Projects And Godzilla In Shambling Towards Hiroshima / Godzilla 3D Poster / Will Silent Night Be Replaced By Godzilla Christmas? / Rare Sci Fi, Fantasy, and Horror Items Go Up For Auction / Godzilla Godzooky Plush / Todd Tennant To Return To Godzilla 94 / Breaking News! Godzilla Spotted In Chiba.....Wait....Its A Tree! / A New Godzilla Board Game Is In The Early Development Stage / Mom! I Want A 1/100 Scale Radio Controled MechaGodzilla For Christmas! / G-FAN #85 / Godzilla Plaque: School Dedicated Two Years Ago / Norman England's Bringing Godzilla Down To Size Featured On Gargantuas DVD Release / King Kong vs Godzilla: Trailer