The Bloody Rage Of Bigfoot Trailer And Teaser Poster

You know, when you are a fan and writer of stuff relating to monsters and B movies you get exposed to some really weird stuff sometimes. That being said, all the weirdness that I have been exposed to did not prepare me for watching the trailer for James Baack's movie, "The Bloody Rage of Bigfoot." I've watched it three times now, and I have no idea what the hell I'm looking at?

The clip isn't as much a movie trailer as it is an acid trip. There are scared little kids, guys with toy guns, fireworks, geese, a very pissed off clown and other strange crap. Come to think of it....I don't remember seeing Bigfoot at all. Update: Okay, after I watched it again I noticed the guy in the bad gorilla costume....I assume that's supposed to be Bigfoot? All the other stuff freaked me out to the point that I didn't notice before.

Baack was boasting about a very different kind of horror movie, something very violent, possibly the bloodiest movie ever created. A Bigfoot movie like no other.

After seeing the trailer I don't know what to think? Is this indeed a horror movie or music video without music?

Oh, and if you want to get even more confused, here another teaser poster for the movie: 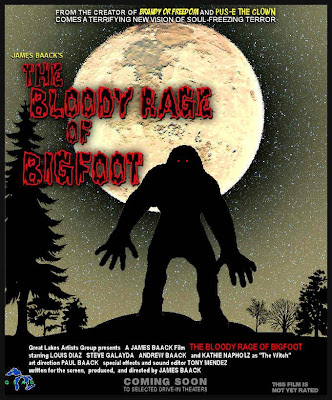 Funny, Bigfoot is on the poster?

See Also: James Baack Is Conjuring Up A Bloody Bigfoot Movie In 3D

Bigfoot Discovered In Windows 7 Wallpaper? / A Close Encounter With Bigfoot - Highway 180 - Arizona / Soviet Scientists Still On The Trail Of Bigfoot / New Photos From Shawn Hunt's Bigfoot Horror The Shrieking / The Legend Of Boggy Creek (1972) / Has A Good Bigfoot DNA Sample Finally Been Found? / A Team Lead By A Russian Priest Search For Bigfoot In Siberia / Allyson Mitchell Believes The True Symbol Of Female Brains And Sexuality Is.....Sasquatch? / Does The RCMP Have A Bigfoot On Ice? / Sci Fi Orders Another Season Of Destination Truth / If Your looking For Ghosts Go To The Aokigahara Forest In Japan / Cryptozoological Figure Set / Southeastern Ohio Society For Bigfoot Investigation Holds Meatings To Discuss Sightings / Are Russian Female Bigfoot Looking For Human Mates? / Bigfoot Stalking Mormons In Houston / Nasa Photo Shows Human-like Figure On Mars / Another Knucklehead Comes Forward To Claim That He Created Pattersons Bigfoot / Recent Reports Lead To The Possibility Of A Large Bigfoot Population Near Houston BC / Monster Quest Is In Colorado Searching For Bigfoot / The Sci Fi Channel Travels Into The Unknown With Unexplained With George Noory This Month