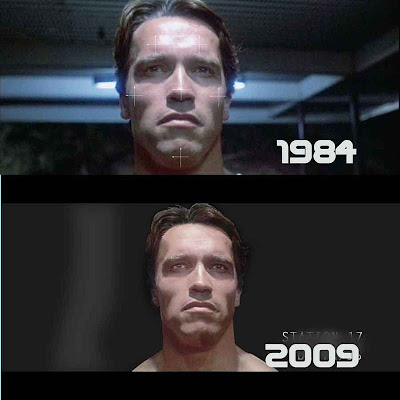 California governor Arnold Schwarzenegger has finally come clean about his upcoming appearance in "Terminator Salvation." Speculation has been swirling that the actor-turned-politician would be reprising the role that shot him to international stardom in 1984, ever since he was spotted on the set of the new film by paparazzi last year.

Schwarzenegger has assured the people of California, that his appearance in the much anticipated film didn't take one second of time away from his duties as governor. How did the Governator pull it off? His appearance in the film will be in the form of stock footage from the fist two "Terminator" films spliced in and CGI renderings.

Schwarzenegger explains to Entertainment Weekly, "I made it very clear that I don't have the time to do the movie. I said that I would be willing to be in the movie if they get the technology together, and so they are working on that right now."

"They would basically take technology out of "Terminator I", and use that walk of mine and somehow bring it in (to the new film). It's just a brief scene."

When I was searching for a photo for this article, I stumbled upon the above image, which is supposed to be a CGI rendering of Schwarzenegger that was developed for "Terminator Salvation." I don't know if it's real or not, but it's pretty cool all the same.