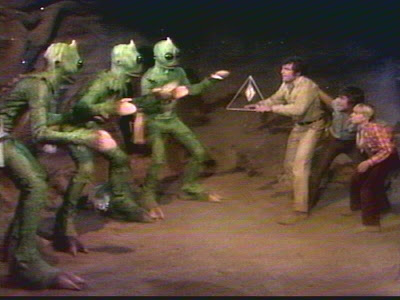 After kicking off with a Memorial Day "Land of the Lost" marathon, SCI FI blasts into Summer '09 with a wealth of original programming from the series premiere of "Warehouse 13" and new episodes of "Eureka" (on its new night Fridays at 9PM beginning July 10th) and "Ghost Hunters" to Saturday night movies showcasing stars such as Jason Gedrick, James Marsters and Peta Wilson.

"Warehouse 13" - Premieres Tuesday, July 7, with two-hour pilot from 9-11PM (ET/PT) - Two Secret Service agents find themselves abruptly transferred to a massive, top-secret storage facility in windswept South Dakota which houses every strange artifact, mysterious relic, fantastical object and supernatural souvenir ever collected by the U.S. government. The Warehouse's caretaker Artie (Saul Rubinek) charges Pete (Eddie McClintock) and Myka (Joanne Kelly) with chasing down reports of supernatural and paranormal activity in search of new objects to cache at the Warehouse, as well as helping him to control the warehouse itself. CCH Pounder guest-stars as Artie's boss Mrs. Federic, along with Allison Scagliotti as Claudia Donovan, a young, hip, brilliant techno-wiz.

"Eureka" -- Returns with 10 new episodes beginning Friday, July 10, at 9PM (ET/PT) Season 3.5 picks up where "Eureka" left off at the mid-season cliffhanger with Jack Carter (Colin Ferguson) being removed from his job as Eureka's sheriff and Allison (Salli Richardson-Whitfield) announcing that she is expecting her recently-deceased husband's baby.

Carter is also confronted by some challenging decisions on the home front where his daughter Zoe (Jordan Hinson) is concerned and encounters a new love interest with the arrival of Dr. Tess Fontana (guest star Jaime Rae Newman) who will supervise the re-opening of Global Dynamics' infamous 'Section 5.'

"Eureka" was the most watched scripted series on SCI FI in 2008 delivering its best performance to-date. The first half of the 3rd season averaged 3 million viewers per week. Co-creator Jaime Paglia and Charlie Craig (The X Files, Brimstone) and Thania St. John are Executive Producers. "Eureka" is produced by Universal Cable Productions.

"Ghost Hunters International" - Returns Wednesday, July 8 at 9PM -- A spin-off of SCI FI's popular "Ghost Hunters" series, "Ghost Hunters International" features a squad of real-life "ghost-busters" - ordinary people who investigate and attempt to debunk claims of otherworldly activity. This summer the team travels to Austria, Ireland, Italy, Chile, Argentina and the Czech Republic in pursuit of the truth behind bizarre supernatural claims. The first six episodes of season two will air this summer with additional episodes continuing in 2010.

"Ghost Hunters International" earned the best-ever first season for a reality series of the network, averaging a 1.7 HH rating and 2.3 million total viewers.

"Ghost Hunters" - Returns Wednesday, August 19, at 9PM (ET/PT) - Plumbers by day, Ghost Hunters by night, Jason Hawes and Grant Wilson head up TAPS (The Atlantic Paranormal Society), a close-knit organization of volunteer paranormal researchers - ordinary people who investigate and attempt to debunk claims of otherworldly activity. In their investigations all over the U.S. and Europe, these self-proclaimed skeptics have managed to expose some of the most frighteningly compelling evidence of paranormal phenomenon ever seen on television! Throughout its run, "Ghost Hunters" has featured speaking entities, mysteriously moving furniture, and ghostly visages and a healthy dose of squabbling within the investigating team. Being scared has never been so much fun!

Enjoying record-high ratings throughout its run since 2004, "Ghost Hunters" remains one of cable's hottest shows, with an average of more than 3 million viewers tuning in so far during season 5 (premiered March 11, 2009). "Ghost Hunters," is produced in association with Craig Piligian's Pilgrim Films and Television (Dirty Jibs, The Ultimate Fighter, In Harm's Way). Piligian and Thomas Thayer, along with Rob Katz and Alan David, serve as executive producers.

"Malibu Shark Attack," starring Peta Wilson - An underwater earthquake generates a tsunami that strikes Malibu and brings a hunting pack of prehistoric-looking goblin sharks to the surface. Although the beach is evacuated before the big wave strikes, a group of lifeguards and a crew of construction workers are stranded in the high water and have to fight the sharks to get to dry land.

"High Plains Invaders," starring James Marsters - In the early 20th century, a small western mining town is invaded by giant insectoid alien creatures whose only mission is to mine uranium to fuel their spaceship - but they'll kill anyone or anything that gets in their way. After they devastate the town, it's up to a retired outlaw to lead a small group of survivors in fighting thing "bugs."

"Hellhounds," directed by Rick Schroeder - After his bride is poisoned at their wedding, a young Greek warrior risks a journey to Hades to rescue her from the God of the Underworld and bring her back to life. What he doesn't know is that the best friend who accompanies him is the man who killed her in a jealous rage.

"Sand Serpents," starring Jason Gedrick - At an isolated Taliban outpost in Afghanistan, a small platoon of US soldiers faces a danger far greater than fanatical rebels - giant worm-like creatures that come up through the sand and devour everything in their path. Their inexperienced lieutenant has to lead them across the treacherous desert to a rendezvous point where an army helicopter will pick them up - but not all of them are going to make it.

A Memorial Day "Land of the Lost" marathon airs from 8AM-4AM (ET/PT), keyed to the theatrical release of "Land of the Lost," based on the 1970s television cult classic. Starring Will Ferrell, Anna Friel and Danny McBride, the Universal movie opens nationwide on June 5th.

For Independence Day, SCI FI presents its annual "Twilight Zone" marathon, running from Thursday, July 2, through Saturday, July 4, featuring episodes from the 1980s version of the series and the classic 1960s show.

The Sci Fi Channel Is Morphing Into Sy Fy.....WTF?