Wolverine News: Tempe Premiere Video And Other Odds And Ends 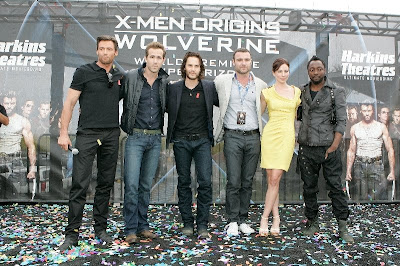 All the stars from the film were on hand, including Hugh Jackman, who plays the films title character. Jackman, who obviously was playing to the crowd, and arrived at the event on a classic Harley-Davidson motorcycle, told the mass of excited fans, "I'm moving here. It's awesome!"

The suburban town of Tempe won the right to host the premiere in an online contest sponsored by the films distributor, 20th Century Fox. Fox was overwhelmed by the number of entries, and the fans in Tempe more than made their case heard, submitting more entries than any other city in America.

Ryan Reynolds told the AP that premiere locations should be put on the ballot more often.

"I think this is how they should do it from now on. I really do," says the actor, who plays Deadpool. "L.A. has had their fair share of Hollywood premieres. So has New York. This is the way to do it. You get to be interactive with the fans." 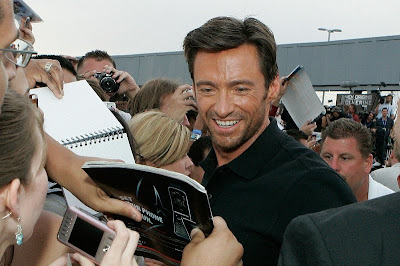 Jackman on how he almost walked away from the Wolverine character after "X-Men: The Last Stand "

Yes, indeed Jackman almost did hang up his claws after the last "X-Men" film, because he felt that the character hadn't been developed properly. Apparently Jackman felt so strongly about "Wolverine" that he had to be convinced by the film makers that his character would behave more like he does in the comic book in their new movie before he decided to reprise the role again.

Recently Jackman told reporters, "One thing I never felt we got with Wolverine that I really wanted to get is that berserker rage which is talked about in the comic books. "

"It felt like Wolverine had got a little soft by X-Men 3 and I wanted to take it back to that bad a** quality. He's tough, he's gruff, he's not politically correct - he doesn't say the right things. "

"There has to be complexity to this character. He's very tough but there's a lot of pain, history to his life that you find out about. It's not pretty. He's a flawed character. That's what I like about it, that's why I'm doing it for the fourth time or else I wouldn't."

Jackman also expanded on a little ritual he has before taping that helps him channel the rage he needs to play Wolverine.

Jackman explains, "It's surprisingly easy to find that inner rage. I do a little trick every morning. I stumbled upon this on X-Men 1. I had to get rid of my hairspray first thing in the morning but my wife was asleep and there was no hot water, it was the middle of Toronto winter."

"I turned the water on and was waiting and I got in and I couldn't make a noise. I don't know how it was running; it was that cold. "

"After 20 to 30 seconds I thought, 'This is exactly how Wolverine feels all the time.' It's that inner rage but you can't yell or do anything. "

"Every morning I do it. It's now a bit of a superstition."

He says, "There's the wonderful Liev who plays Victor. Ryan Reynolds too is extremely charismatic; both witty and he can combine action and humour. "

"The creators of these characters have all created characters that could all have their own origin stories. Hopefully fans will enjoy "Wolverine" and more will be made."

Just in case you weren't in Tempe for the premiere, here is a video of what you missed: