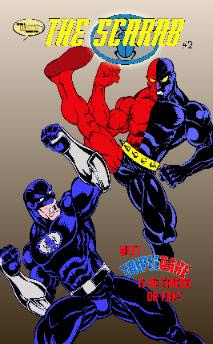 You really have to give credit to Brett Kelly for doing everything in his power to resurrect the comic book character "The Scarab." Not only is he making a movie about the obscure hero that first appeared under the Nedor Comics label way back in 1945, now he has launched a line of comic books featuring "The Scarab" and several other characters from the comic.

Under his, Brett Kelly Entertainment label, the director, who pumps out films in mass, is presently producing four different comics based on "The Scarab". Two of the books feature the series title hero in both new adventures and reprints of the classic comics. There are also 'spin-off' books featuring both, "The Woman in Red", and "Jack of Spades."

Here is a list of the comics with a short synopsis for each:

Reprints featuring key characters in our comics and in the SCARAB feature film!
THE SCARAB: GOLDEN AGE CLASSICS

Classic rare tales of the Nedor Comics hero "The Scarab" also features a sneak peek at the Scarab movie!

Thrill to the adventures of the character that is often referred to as the First female superhero! Also contains a sneak peek at the W.I.R character from the Scarab feature film! THREE ISSUE MINI-SERIES

Organized crime has someone new to deal with!. JACK OF SPADES is a ruthless vigilante with a personal stake in making sure that crime pays- IN SPADES!
Here is some historical info on "The Scarab" from Wikipedia:

The Scarab was the secret identity of Egyptologist Peter Ward. Ward was actually the reincarnation of an ancient Egyptian high priest; by rubbing his magic scarab ring Ward would instantly transform into the super-powerful Scarab.

Alan Moore revived the Scarab, along with many other Nedor Comics characters that had entered the public domain, for his Tom Strong series. In Tom Strong #12 (June 2001), the Scarab was revealed to have been one of the members of SMASH that had been placed in suspended animation after an alien invasion from the moon in 1969. Awakened 30 years later, the Scarab joined his former comrades in the fight against the alien. SMASH disbanded shortly thereafter, but reformed three years later. The Scarab is a member of the reformed group.

In the Terra Obscura spin-off series, the Scarab allows himself to be bonded with the ancient Egyptian god Thoth in order to control one-time superhero Mystico (who is himself bonded with the god Seth).

You have to wonder how much of a market there will be for these "Scarab" titles? If Kelly fails to re-ignite interest in the character, it won't be from lack of devotion. Not many people would invest this much time and effort into something that they don't truly love. Maybe the time is right for the re-birth of "The Scarab", people will always need heroes, especially in this world that is quickly turning upside down.

Here is a collection of cover art and illustrations from the comics: 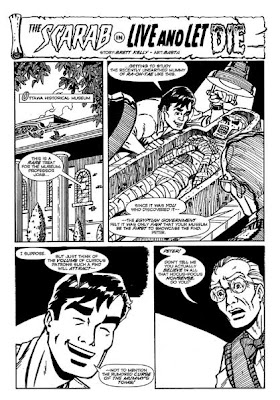 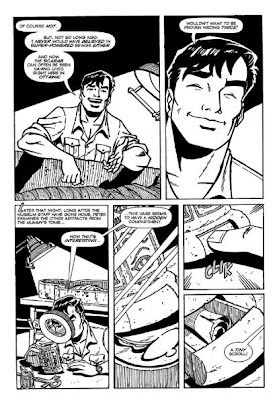 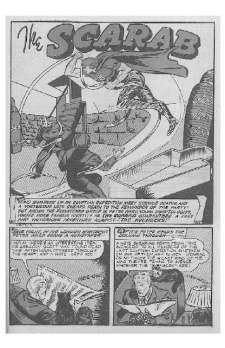 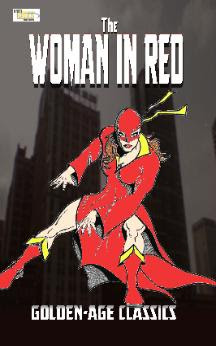 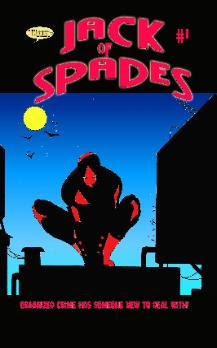