The Bloody Rage Of Bigfoot (3D) - Beauty And The Beast....Well, More Like Beauty Is The Beast.. 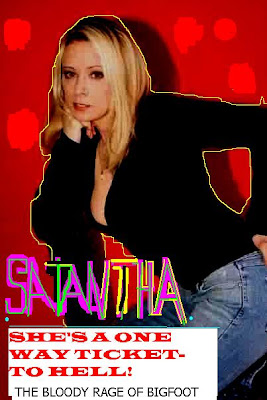 So far all the photos that we've seen from James Baack's mega-gory new horror film, "The Bloody Rage of Bigfoot", have been a real mixed bag. There have been guys in ape suites, scared kids, scared teens, nutso clowns, old buildings and some half-pig-half-demon thing. Well, today we have something we can all wrap our minds around, eye-candy.

Eye-candy in the form of Andrea Hutchison, who plays Satantha (aka Witch #1), one of the main characters in the film. In fact, a very pivotal character in the film.....that will be explained in a second.

Oh, real quick, check out the really bad "cut-and-paste" photoshop job on the promo pick of Andrea. Someone needs to point out to whoever did it the "soften edge" feature.

"We shot an INCREDIBLE scene last week where an unsuspecting news reporter comes to an unfortunate fate at the hands of our two witches- Satantha and Looseyfur."

"It is a brutal and sadistic "torture" scene that climaxes with our two witches ( that are HOT! and I mean HOT!!!!) engaging in some activities that will heat up the screen enough to call the fire department."

The director goes on to reveal some very important information about Andrea Hutchison's Santantha character, information that you would think he would keep a secret, "Demonfoot is actually Satantha. She had a really messed up childhood. As a child she grew up on a farm and has some really unpleasant memories of the pigs that were kept there."

"She puts the pig mask on when she is about achieve another victim. It's sort of her alter body experience. Actually she is really messed up in the head and vulnerable to dominant personalities. That's how Looseyfur (her mentor witch) manipulates and controls her to do anything ( and I mean anything) she wants."

With hot witches performing torture and tons of "free-flowing" blood, Baack is having trouble editing his film down to get the rating he wants, "We have some serious editing to do just to bring this down to an NC-17 rating."

"At this point we are probably at a half way point of filming and hope to get this completed by September or October."

"Again, we promise to deliver a film unlike anything seen by anyone before. This is a horror film in it's purist form.
It's got enough blood and guts to scratch the itch of any gore hound but it also goes in directions that are most unexpected."

"This will be a movie that fanboys are sure to be arguing over and will hopefully be enjoyed by everyone else that sees it. "

I've said it before, and I will say it again, "The Bloody Rage of Bigfoot" is certain to be one hell of a wild ride! 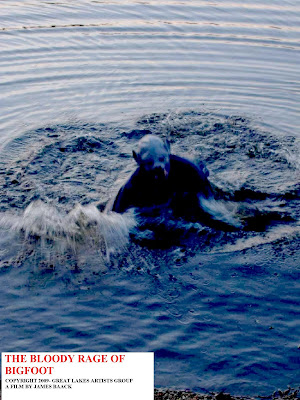