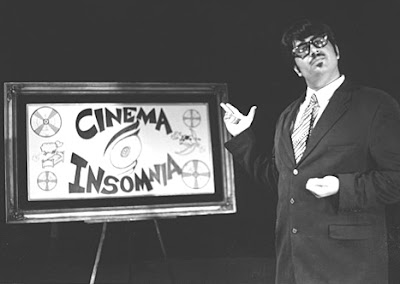 A Cult TV series that echoes the local heyday of late night hosted horror films, Cinema Insomnia with Mr. Lobo, is now seen in cities across the country on AMGTV digital broadcast network.

The current distributor of the show, Apprehensive Films’ deal with AMGTV North America immediately covers all full-time affiliates. Episodes are available weekly to roughly 75 stations as well as hundreds of cable systems and networks served by the network, with a potential Clearance of 35 Million Households and six out of the Top 10 Markets

Apprehensive Films, plans to keep most of their bartered spot time in the show to promote Cinema Insomnia’s popular DVD line and other products they distribute for the cult film and DVD market. There will be Fall 2009 availability for select sponsors for placement in the all new Halloween Special featuring licensed “indie” film Mark of The Damned.

“Mr. Lobo is the Horror Host of The Modern Era…and should be on in every state in the union!”—John Stanley, Film Critic, Author, Host of Creature Features 1979-84

“I love Cinema Insomnia…Mr. Lobo is a legendary horror host in his own right.”
--Cassandra Peterson AKA Elvira, Mistress Of The Dark

Cinema Insomnia is expected by AMGTV to be a success in prime time 2009-2010 rankings. The shows senior consultant, Bob Wilkins, who passed away this year, and was the subject of two acclaimed documentaries released on DVD Watch Horror Films—Keep America Strong and American Scary, proved with his own show Creature Features in the San Francisco area that this kind of programming can thrive in prime time. Like it’s famous predecessor Creature Features, Cinema Insomnia has dual female and male appeal and is big in households with viewers 14-54. The series has grown in popularity each of its nine seasons.

Jonathan Morken of Apprehensive Films stated, “Cinema Insomnia combines all of the characteristics that made Bob Wilkins’ show a success in the 70’s and brings it up to date. Bob was senior consultant, when the show began in 2001, and mentored Mr. Lobo, who has since proven to be the nation’s premiere film host. Mystery Science Theater, Joe Bob Briggs and Elvira endure as icons but they’re not down in the trenches hosting these films every week anymore. Comparisons aside, Mr. Lobo has legions of fans and the show has brought ratings and delighted viewer response to every market we’ve put it in. We expect it to be a hit in prime time and overnights and will be enjoying substantial momentum from the show’s upcoming 10 year anniversary. Cinema Insomnia continues to be the ultimate late night hosted movie brand and its value to stations across the country should be exceptional."

So, pop some popcorn, get in your jammies, and prepare to fully enjoy this slumber party celebration of fun late night TV with your host Mr. Lobo Saturday Nights 9PM PST, Midnight EST on the AMGTV network.

Critically hailed and award winning weekly two-hour series featuring horror, sci-fi, drive-in, and cult films wrapped in irresistible off-beat comedy, never-before-seen footage, and fascinating behind the scenes facts and interviews, vintage commercials, monster movie trailers, and other random gems, which makes it both cutting edge and nostalgic of a bygone era of movie fun. Lobo has become a cult figure and a favorite of conventions and film festivals.

See Also: Mr. Lobo Enters The 3rd Dimension For Virtual Fan Gathering / Mr Lobo Interviews Monsters From The ID Director David Gargani / Mr Lobo Continues To Be The Busiest Man In Showbiz Announcing New Appearences And DVDs / Plan 9 From Outer Space Strikes Again / A Public Memorial To Bob Wilkins In Sacramento / Is There Something Bold And Creative Brewing In Sacramento? / Support Your Local Horror Host....Or In This Case Mr Lobo / Bob Wilkins 1932-2009 The Passing Of A Bay Area Icon / Merry Christmas From Monster Island / Mr Lobo Composes A New Halloween Song / Silicon Presents The Lobotronix Film Show / Mr Lobo And Conrad Brooks Cast In Plan 9 From Outer Space Remake / Mr. Lobo & The Queen Of Trash Get The VIP Treatment At The B Movie Celebration / Sara Dunn Photo Shoot And Casting News / B Movie Celebration Scores World Premiere Of Cleavagefield / The Hometown Of The B Movie Celebration Needs Our Help! / Cinema Insomnia: In Search Of Ancient Astronauts /Mr Lobo To Receive Lifetime Achievement Award At The B Movie Celebration / Famous People Talk About Star Wars / Two More Big Reasons To Go To The Fangoria Weekend Of Horrors / Donate Trash So That The Queen Of Trash Can Make Her Music Video Debut / Interview: Sara Dunn (Queen of Trash)
By Ken Hulsey - June 22, 2009