Andy Serkis To Play Caesar In RISE OF THE APES 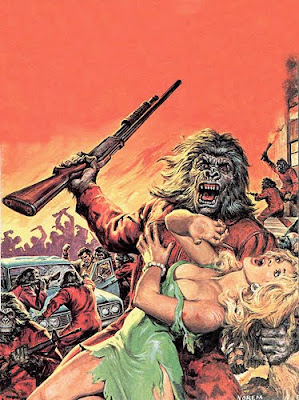 Actor Andy Serkis, who has the pleasure of playing both King Kong and Gollum, will now have the chance to play another of cinema's greatest simians, Caesar, from the "Planet of the Apes."

Indeed, the performer who has the uncanny ability to mimic animal movements, has been cast as the leader of an ape rebellion over mankind in 20th Century Fox's reboot of the popular "Apes" franchise entitled, "Rise of the Apes."

Though many news outlets are reporting that Serkis will be donning an ape costume and makeup similar to the kind made famous by John Chambers in the 1960s and 70s, it is safe to assume from the reports that have surfaced that the actor will once again be used as a model for a CGI character.

Of course, the fact that Peter Jackson's effects house, WETA Digital, has been hired to work on the film's effects probably is a dead giveaway here.

Not much is known about the film as of yet, but early reports stated that the film would center around the genetic engineering of apes to be used as slaves for mankind, similar to the plot of "Conquest of the Planet of the Apes". As can be expected, these intelligent primates soon get sick of being treated like animals and join forces to turn the tables on us human types.

"Rise of the Apes" is set to begin filming next month in San Francisco under the direction of Rupert Wyatt. Other cast members include Slumdog Millionaire star Freida Pinto, James Franco and John Lithgow.