The First Character Sketch From "Goldilocks In Zombie Land" 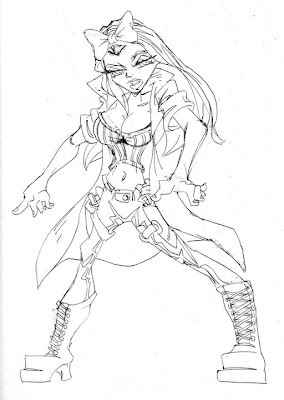 Last month I reported that Comic Book Divas were getting ready to launch an online web comic series about a zombie hunting Goldilocks who's likeness was being modeled after scream queen Scarlet Salem.

Well, today I was sent the first preliminary artwork of the gun-toting "Goldi" by Jason Dube.

As you can imagine, this is not the Goldilocks that everyone grew up with. She's sexy, savvy, and carriers a plethora of weapons that would get the "Predator" all worked up.

Here is a copy of the release that came with this updated version of the character that sprang from the pen of English author and poet Robert Southey way back in 1837.

The preliminary artwork is beginning to arrive from artist Jason Dube on some of the primary characters for the upcoming web series, we are going to begin story
boarding the first pages very soon.

The first primary character is Goldilocks that is being portrayed by horror actress and scream queen Scarlet Salem; Jeff Hughes owner and primary writer for Comic Book Divas and Jason Dube owner of Scattered Comic Book Studios and artist strived to keep many of the elements of the fairy tale costume with a modern look and combine it with a sort of gunslinger look.

Although not shown, our Goldilocks will not skip down the cobbled streets of the storybook unarmed, she will be packing two shotgun pistols, a wrist activated crossbow gun, a samurai blade shaped bowie knife and just in case all else fails a spring loaded baseball bat.

We will be presenting other characters very soon that will include; Queen Rapunzel
(Portrayed By Dai Green) The Woodsman (Portrayed By Joe Knetter) and host of
others as the story progresses.