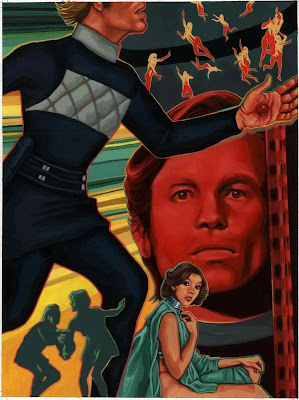 Variety is reporting that the Ryan Gosling (The Notebook, Fracture) is in negotiations to step into the shoes of fellow British thespian Michael York to play Logan 5 in the upcoming "Logan's Run" remake.

Reportedly Warner Bros is also in negotiations with Nicolas Winding Refn to direct the film which has been various stages of development for over a decade. Refn would join a long list of film makers that have been attached to "Logan's Run" throughout the years, a list that also includes Carl Erik Rinsch and Bryan Singer.

Producers Joel Silver, Andrew Rona, Akiva Goldsman and Kerry Foster have already been in place for some time.

Last year Silver revealed that "Logan's Run" was going to be produced in 3D, which should come as no surprise to anyone due to the fact that just about all upcoming fantasy film projects are slated to be produced in that format.

In the distant future the survivors of the apocalypse live in a giant domed city where their every need is taken care of by overlord computer. People live in world of pleasure, but there is one catch. At the age of 30 (21 in Johnson and Nolan's novel) all citizens are required to report for a ritualistic murder ceremony known as "Carousel". The populace has been fooled into believing that this ceremony leads to reincarnation and a new life though its real purpose is population control. To insure that citizens don't "chicken out" on their way to Carousel there is a police force in place known as "Sandman" who terminate those who attempt to run.

Logan 5 is one of the elite Sandmen. During one of his routine terminations he retrieves an anch, a symbol for a mythical place called Sanctuary where runners can find refuge, off the body of a would be runner. Upon placing the item into the computers scanner he is instructed to undergo a process to alter his "Life Clock", a symbol of a persons age embedded in the palm, to the blinking red of a person on last day so that he may pose as a runner to infiltrate Sanctuary. During the process he learns that 1036 runners had managed to escape the city and that Carousel is a ruse.

Along with his companion, Jessica 6, Logan attempts to flee the domed city in search of Sanctuary.

Let's see if Logan really gets running this time.