Come On Down And Discover Austin's MUSEUM OF THE WEIRD 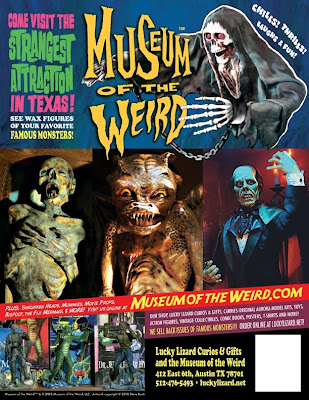 I was 10 when I first saw the dead man frozen in permanent repose in the block of hazy blue ice, and it marked me forever. I didn't realize it at the time, of course; I was already, at that tender age, thriving on a steady diet of Mad magazine, Forrest J Ackerman's Famous Monsters of Filmland, and WPIX's Chiller Theatre. The railway cuttings near my upstate New York home were awash in shale-stuck trilobites from the bottom of the ocean at the dawn of time, and I sifted that soft-gray stratum almost daily with my dad, a mini-Darwin with Godzilla on the brain. I was, in short, a weird kid in love with weird things. Not much has changed since then.

But in the summer of '76, at the New York State Fair, I came face-to-face (well, actually my dad hoisted me onto his shoulders for a better view) with what has come to be known as "The Minnesota Iceman," an allegedly real caveman (or possibly Sasquatch, or outright flimflam) that was toured from county fair to state fair and everywhere in between by its owner/discoverer, one Frank Hansen. It was horrific and wonderful and supercool all at once. And it was dripping ....

Which brings us up to now.

If you're an Austin resident, you've probably walked past the crowded storefront at 412 E. Sixth with the Lucky Lizard Curios & Gifts sign hanging outside, lodged between Roppolo's Pizzeria and an anonymous (in the daytime, anyway) nightclub dubbed the "512." The frontage and window display, with waxwork figures of famed Siamese twins Chang and Eng, looks at first glance like just another tourist trap for visiting out-of-towners. But it's not so much the Lucky Lizard, per se, we're interested in here, though. Instead, it's the other business that's run in the back half of the building: the Museum of the Weird.

Lovingly assembled over the past seven years by owner Steve Busti, it's a remarkable collision of genre film ephemera including skin-crawlingly lifelike, and life-size, waxwork tableaux of Elsa Lanchester as the Bride of Frankenstein; Lon Chaney's pitiful, hunchbacked bell-ringer, Quasi-modo; Bela Lugosi's Dracula; the Creature From the Black Lagoon; Bub, the undead star of George A. Romero's Day of the Dead; and the newest – and most hirsute – member of Hollywood's horror pantheon in Austin, a full-size half-model of King Kong, arms outstretched, toothsome maw agape, just waiting for the next Fay Wray to get within grabbing (and disrobing) distance.

And the weirdness doesn't stop there. Busti has collected an impressive assemblage of sideshow finery, from two-headed chickens and piglets to an actual Fiji Mermaid (a recent acquisition): She's half-human, half-fish, and all fake, but a classic and moldering example of a sadly vanishing slice of roadside Americana that is as much a part of our cultural heritage as Ray Bradbury's dark carnivals and the 1950s-era fear of mutated, gigantic desert fauna.

Busti himself, clad in an endless variety of Hawaiian-print shirts, a porkpie hat, and glasses, resembles no one so much as a young William M. Gaines, Mad magazine founder and the creator of those notorious EC horror comics. A former graphic designer, comic book artist, and Austin filmmaker, Busti even has a complete run of Famous Monsters on display and for sale, both the classic Sixties issues and the new, Harry Knowles-associated reboot (see "There's a New Uncle in Town," Dec. 17, 2010).

Combined, the Lucky Lizard – so named for the fact that Busti and his wife, Veronica, have taken in some five rescue lizards over the years, not the least of which is Torgo, a 6-foot-long Nile monitor lizard that lounges impassively out back between the museum and its nearly completed Kong-overseen screening-room-cum-séance-parlor – and the Museum of the Weird (www.museumoftheweird.com) represent some truly weird, genre-film-centric awesomeness. And as was the case with the late, lamented punk rock/Japanese toy store Atomic City, it seems that not everybody who would immediately fall in love with it is even aware of its existence.

Busti plans to change that, and fast. "We're trying to get that finished before Fantastic Fest," he tells me, fingers crossed, "so that we can show movies and have people come up and take their pictures in Kong's outstretched paw." Merian C. Cooper, legendary showman and director of the 1933 King Kong, would surely approve.

So how did Kong and company end up on Austin's Sixth Street of all places?

"I moved to Austin from northeast Pennsylvania in 1997 after the comic book series that I had been working so hard on fell apart," the amiable and gregarious Busti tells me. "If you've ever been to that part of Pennsylvania, it's really overcast and rainy in the winter. I'd just broken up with my girlfriend, and I was kind of depressed, and I just had this thought: I'm moving to Texas! I had $41 in my pocket, and I literally jumped in my van and started driving to Texas that very night without even packing up my stuff."

Common sense prevailed, of course, and after three hours in transit, he turned around, packed up all his belongings, and returned to the road, eventually settling in Austin, where he soon discovered his other passion: filmmaking.

"I immediately started attending Steve Mims' Austin FilmWorks for three years," he says. "I ended up shooting a bunch of short films, and I'm actually the very first person you see up on screen in the 2003 remake of The Texas Chainsaw Massacre. I'm one of the two people you see putting a body in an old-fashioned, Ghostbusters-style ambulance."

Busti eventually worked on a feature film – What You See Is What You Get – that "went nowhere," before going on to form the ill-fated filmmaking co-op Ranch Studios off of Cameron Road. That, too, went nowhere fast (although there were some great parties). Austin's promise, it seemed, had tarnished a bit since Busti's arrival, and he was ready to pack up his bags (and lizards) and head back to Pennsylvania when some friends invited him to move with them into the space above what would eventually become the Lucky Lizard. (Longtime Austin residents may recall the building's previous tenant, Brian Joseph's Bydee Art Gallery.)

Long story short, Bydee Art moved out of the space at 412 E. Sixth seven years back, and with the help of Joseph, Busti and his wife moved in, dubbing the space the Lucky Lizard in honor of their preternaturally patient reptilian rescue pals.

"Running the business with my wife was really a good combination," says Busti, "because I brought to it my love of weird movies, Fiji mermaids, and just plain weird stuff, and she brought to it the things that would actually bring in money: T-shirts, jewelry, and local artists' work. It was nothing like it is now."

Realizing that there was plenty of space in the back of the new store that wasn't being utilized, Busti was struck by a capital idea: He already had amassed, over the course of his life, all sorts of weird and wonderful film props, sideshow freakery, and oddities galore – why not put them all in one place and call it "The Museum of the Weird"? What if he could create an actual tourist attraction just like those from his childhood? Because, let's face it, that kind of weird roadside attraction is part of what made traveling across the country in the Fifties and Sixties so cool, and it's sad because exactly those sorts of places have all but disappeared in this new Digital Age.

So there you have it. The origin story of the coolest, weirdest, most outré, and cinematically inclined storefront in all of Austin.

"When you get right down to it," says Busti, drawing me close, "there were two big formative experiences in my life, and they both led directly to what I'm doing today.

"The first was when I was 5 or 6 years old and my aunt took me to the Wayne County Fair. I remember there was a big truck with the words 'See the Frozen Caveman!' painted on the side. So I walk up a ramp into the truck, and I recall there were all these adults looking down into this pit with a piece of protective glass covering it. I was too short to see what was in it, so in my childhood enthusiasm I literally jumped up onto the edge of this pit, and I came face-to-face with this hideous, snarling caveman frozen in a huge block of ice. And that was the famous Minnesota Iceman!"

Coincidence? I think not.

And the second prime motivator in Busti's lifelong journey into mystery?

"The very first movie I ever saw was in New York City on 42nd Street. It was a double feature of Godzilla vs. Megalon and Terror in the Wax Museum, if you can believe it. Between those two seminal events in my life, that pretty much sums it all up.

"Honestly, I just want to share some of that feeling that I felt as a kid, looking into the eyes of that ugly caveman under ice, with the next generation. I want to share the terror ... and the wonder!"
By Ken Hulsey at September 10, 2011