Fox's FRANKENSTEIN To Be Told From Ygor's Perspective 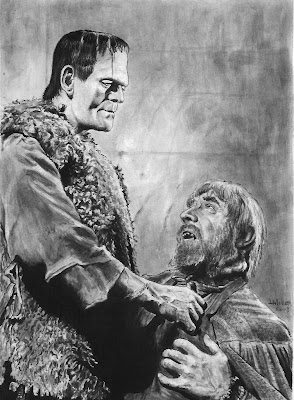 Back in June I noted that Fox had put a new "Frankenstein" movie into high gear in hopes of beating out about a dozen other studios working on a similar project to the box office. In hopes of getting a leg up on the competition Fox hired screenwriter Max Landis to pen the story. At that time there were no details on just how the writer was going to approach such a project that had been done over and over again by so many different entities.

Now it seems that Landis has found his niche, Frankenstein as seen from Ygor's (Dr. Frankenstein's assistant .... as if you didn't know) perspective.

Landis explains," I was having an argument with my friend about when Ygor first appeared in the Frankenstein mythology. The argument got more and more intense. He was convinced that Ygor was in the Universal film. I told him that was a hunchback named Fritz. He didn't believe me and so I did some research. I read the original book. In the original book [Frankenstein is] not a doctor, he's a college dropout. The whole book is spent in fear, fleeing from a smart monster. It's exactly like the Mary Shelley's Frankenstein movie.

So I watched all of the original Frankensteins, all of the Universal Frankensteins. I found Ygor. He's in the third Frankenstein film. He's a broke-neck blacksmith played by Bela Lugosi, who manipulates the monster for his own means. He's not a hunchback and he's not Frankenstein's assistant. But that can't be right! Everyone knows Frankenstein's assistant is Ygor. ... I began to pick apart our knowledge of Frankenstein and discovered that the public's idea of [the Frankenstein] myth comes from a million different places. ... I became committed to recontexturizing it all so that it all works in one story. Yeah, it's a period piece. Yes, it's from Ygor's perspective. But, man it's cool."

Now if only Fox could resurrect Bela Lugosi to play the part .... now that would be cool!
By Ken Hulsey at September 19, 2011