PROOF! There are giant creatures living at the edge of our civilization. 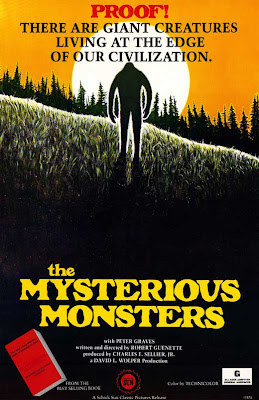 The Mysterious Monsters (1976) was one of the first theatrical releases produced by Sunn Classic Pictures. It was narrated by actor Peter Graves. The film investigated not only the possibility of Bigfoot's existence but also of the Loch Ness Monster and the Yeti (the Abominable Snowman). It featured dramatic reenactments of various reported Bigfoot sightings. The film showed one witness being given a lie detector test, another being placed under hypnosis. The Mysterious Monsters was the first movie to feature the home movie taken by Roger Patterson in 1967 reported to show a Bigfoot. Anthropologist Grover Krantz was interviewed and said he believed the film to be authentic. Famed Bigfoot hunter Peter Byrne was also featured and gave insights on the hunt. In discussing the Loch Ness Monster, the film showed a 1934 photograph that was said to be of the creature. In 1994, however, this photo was proven to be a hoax.