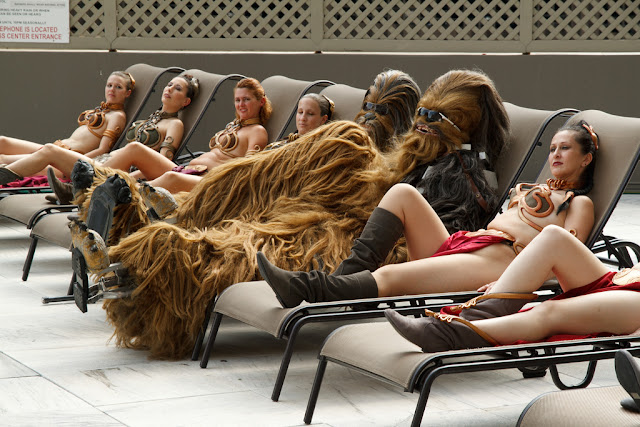 How do you say “May the Force be with you” in Navajo?

“May the force be with you,” might translate into “may you walk with great power,” or “may you have the power within you,” Laura Tohe, a fluent Navajo speaker and English professor at Arizona State University, told Yahoo. The correct translation of the famous movie phrase matters, because the 1977 sci-fi classic film, Star Wars or – if the online English to Dine translator can be trusted – Sǫʼ Baaʼ, is being translated into the Navajo language.

Will actress Carrie Fisher slip into her Slave Leia outfit from “Return of the Jedi” for the new untitled “Star Wars: Episode VII” film?

Over the weekend, Fisher was a guest at the Calgary Comic and Entertainment Expo. She confirmed her return as Princess Leia Organa in Disney’s upcoming Star Wars film. Fans attending the event were hoping to get some juicy details on the new film, but Fisher didn’t give up very much. Though she did mention, she is going to be in shape for the role.

“I like being bought by Disney, because they never wanted to buy me before. I’m glad they are doing a new movie because they are sending a trainer to my house so I can get in really good shape. So I’m really eating a lot of sugar in advance, as you can see. By the time I really get down to it I will have eaten everything.”