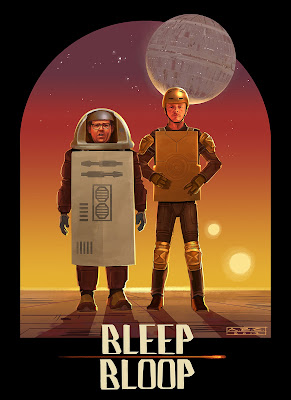 J.J. Abrams usually looks like the cat who ate the canary, as the geek who rose to become King of the World. Now that he's become King of the Universe-- or, er, galaxies-- by taking over both Star Trek and Star Wars, the guy really can't help himself. He seems both in disbelief that he's been handed these two massive worlds, and smugly sitting back with the knowledge that he's about to change geek lives, and nobody but him knows how he's going to do it. And he looks like that even when in conversation with someone he knows well, Simon Pegg, who plays Scotty in Star Trek Into Darkness and who is one of many very famous Star Wars fans. In the clip below you see the two of them talking about what Star Wars means to the both of them...

(Video After The Break)