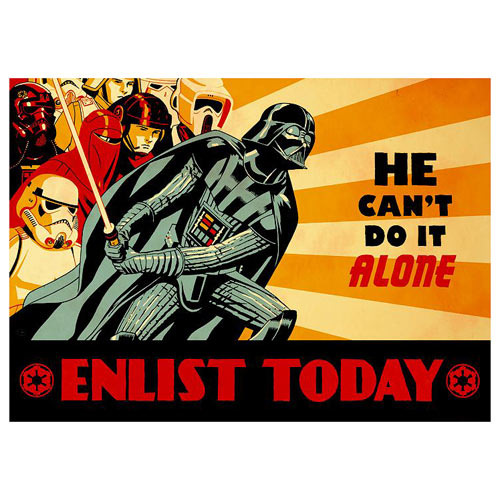 Plenty of people have those hip and nifty vintage war posters on display inside their home, but you can do them one better with this war propaganda poster from the Star Wars universe! The Star Wars Darth Vader Enlist Today He Can't Do It Alone Paper Giclee Art Print is a fantastic piece of artwork that features an image of the Dark Lord rushing headlong into battle, lightsaber in hand, with an array of the Galactic Empire's finest coming up behind to support the Sith Lord. With a retro artistic design in the likeness of old war propaganda posters, along with the words "Enlist today. He can't do it alone." this amazing giclee is printed on paper and measures 19-inches wide x 13-inches tall. Signed by the artist, it's a limited edition of just 125 pieces!