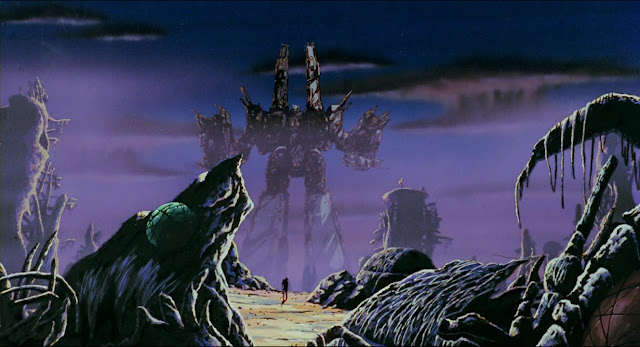 In 1984 the animated television series MACROSS had reached new heights in popularity in Japan. Never before had an animated series struck such a chord with the Japanese public. Certainly shows such as Astro Boy, Kimba, Gigantor, Mazinger and Gundam were popular entities among the younger population, but MACROSS had transcended all age groups, classes and genders like no anime before it. Songs from the show, sung by Mari Iijima (as Lynn Minmay), were climbing the charts one after another. In fact, Lynn Minmay (despite the fact that she was a fictional character) had become as popular a pop star in Japan as Madonna had become in America. The time was right for the shows directors, Noboro Ishiguro and Shoji Kawamori, to begin work on a big screen adaptation of the MACROSS story. A theatrical release would allow for higher production values, cleaner animation and a more adult oriented storyline. The biggest challenge for the two directors would be to condense the series’ numerous episodes and complicated plot down to a serviceable 114 minutes. Ishiguro and Kawamori knew this would not be easy, but both were up to the challenge. The movie would feature all of the elements that made MACROSS a hit, transforming mecha, unique spaceship designs, and a strong character driven story. THE SUPER DIMENSION FORTRESS MACROSS: DO YOU REMEMBER LOVE? opened in theatres throughout Japan on July 21, 1984 and became an instant box office hit.

As in the original television series MACROSS, the films plot would revolve around a daredevil turned fighter pilot named Hikaru Ichijyo (Arihiro Hase) who finds himself involved in a very complicated love triangle. Ichijyo is torn between his feelings for a young Chinese pop star named Lynn Minmay and a strong willed military officer named Misa Hayase (Mika Doi). As in the television series, the demands of Minmay’s fame became too much for the young pilot to deal with, and he would end up paired (through a series of catastrophes) with the stern, yet vulnerable Hayase.