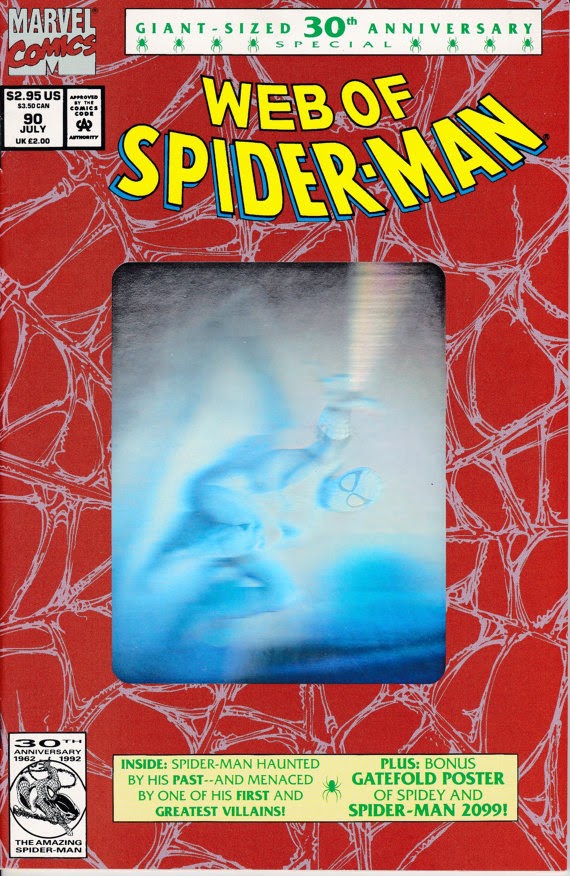 This comic book is in new condition and has never been read. It has only been removed from it's bag once to be scanned for this listing. Comic is complete with cover and all pages attached. This comic has very few flaws that warrant a VF- NM grade.

"Sleight of Mind!" First printing. Giant-Sized 30th Anniversary Special Issue. Silver hologram cover. Script by Howard Mackie. Pencils by Alex Saviuk. Inks by Sam DeLaRosa. The wondrous wall-crawler is chasing robbery suspects through the South Bronx when he suddenly runs into Galactus! The Ravager of Worlds has beaten the Avengers, Fantastic Four, and X-Men and now blasts the web-slinger into oblivion! Or so the confused web-slinger thinks! However, the wall-crawler has just ventured onto the set of a movie…and his original agent, Maxie Shiffman, from days long, long gone by is there too. Before the spectacular one can ask Maxie what's going on; the Hobgoblin, Green Goblin, and Demogoblin attack! And a few minutes later so does Venom! The whole situation keeps getting more and more mysterious! And that persistent mist keeps hanging around too! Can the Amazing Spider-Man solve the mystery? Or perhaps just solve Mysterio! (Notes: Maxie Shiffman previously appeared way back in the very first issue of the Amazing Spider-Man (1st) series. This issue includes a fold out poster by Rick Leonardi and Al Williamson featuring Spider-Man and Spider-Man 2099. The second printing has a gold hologram cover and was also published in July 1992. The cover hologram is based upon an illustration by John Romita, Sr.)