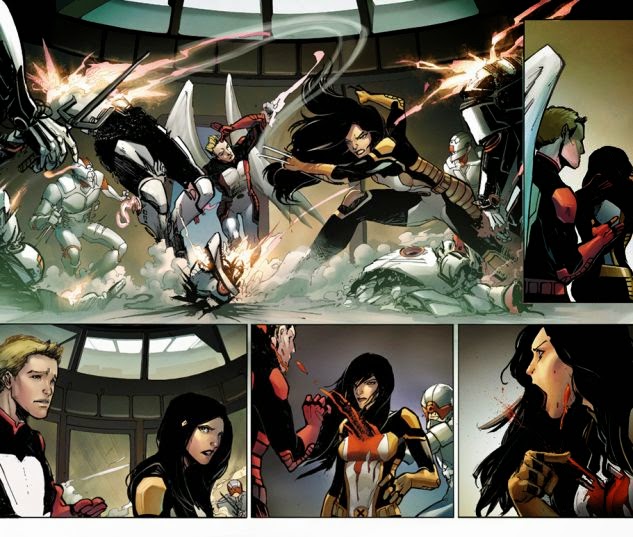 A world without Wolverine leaves everyone in the Marvel Universe reeling.

Of all those impacted, however, X-23 wonders if his death defines her fate as well, something writer Tim Seeley explores in October’s DEATH OF WOLVERINE: THE LOGAN LEGACY #2. Seeley tells Marvel.com where he and artist Ariela Kristantina plan to take the former assassin berserker as she copes with the loss of her genetic kin.

Marvel.com: What interested you most about getting to write an installment in this critical post-Death of Wolverine limited series, THE LOGAN LEGACY?

Tim Seeley: Mostly it was the chance to work with [editors] Mike [Marts] and Katie [Kubert] again, as well as the crew I work with on Batman Eternal, James [Tynion IV], Ray [Fawkes], Kyle [Higgins], and the bonus Marguerite [Bennett]! Plus, I thought it’d be interesting to deal with a Marvel U without Wolverine, since he’s been so prominently in the forefront of comics since I started reading them.

Marvel.com: From your perspective, what makes X-23 such an engaging character to write and also so critical to the legacy concept?

Tim Seeley: Well, she’s actually part Wolverine, in that she shares a lot of his DNA, but she’s never been his daughter. So that makes for some interesting conflicts for her to deal with. Honestly I was never really very into X-23, I think the clone thing turned me off, but [I’m interested in] having her have to deal with the death of a guy whose life could determine her future appealed to me; the idea of nature vs. nurture, and if she’s predestined to live Logan's life.

Marvel.com: Without giving too much away, how does she react to Logan’s death?

Tim Seeley: At first, I think she sees it as very fatalistic. She sees her end in the way he died. She thinks her future is written.