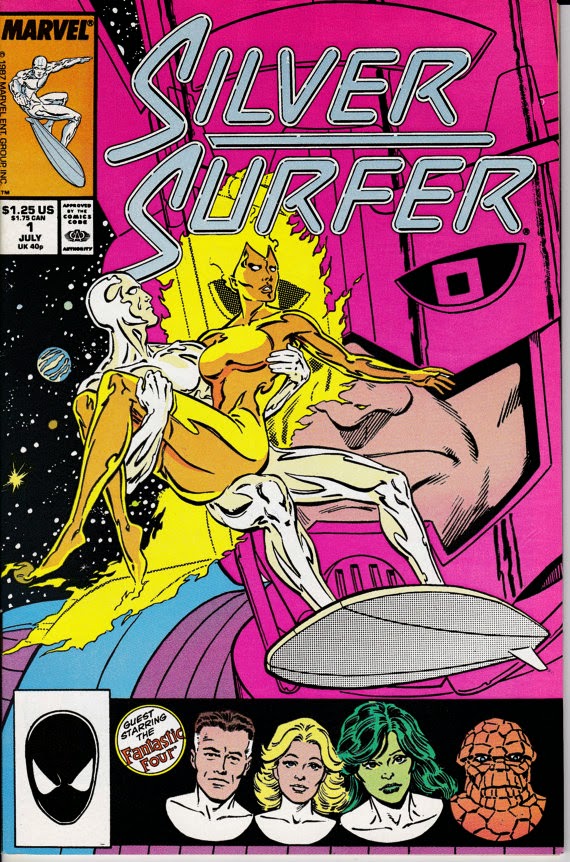 This comic book is in new condition. Comic is complete with cover and all pages attached. This comic has very few flaws that warrant a NM grade.

Still trapped on Earth, the Surfer spends time examining different aspects of the environment he's trapped in. Running into the Fantastic Four, they begin a discussion about potentially freeing the Surfer from the Earth, when the Surfer is suddenly attacked by the Champion. The Champion is bested in battle with the Surfer, and concedes as he has come to the Surfer to warn him not to get involved with the Skrull's quest for conquest. He also tells the Surfer that Galactus' current herald, Nova, is the Skrulls prisoner. The conversation ends with the Champion explaining that the Surfer could possibly leave the Earth if he wanted too, before departing.

This gets the Surfer and the FF thinking of all the times they tried to free the Surfer. When Ben wonders if the Surfer ever tried to leave the Earth without his board. The group suddenly realize they never thought about it before, that perhaps it's the Surfer's board, not the Surfer himself that is held back by the barrier. Flying out into space aboard one of the FF's space shuttles, the Surfer is amazed when the plot really works. Converting his board into pure cosmic energy he manages to get it past the barrier as well. Thanking the Fantastic Four once more for helping him free himself from the Earth, the Surfer soars off into the vast universe.

The Surfer finds Galactus, who is about to destroy the Surfer when Norrin offers to collect Nova for him in exchange for the removal of his punishment. Galactus agrees and the Silver Surfer storms the planet where Nova is being held prisoner. Freeing her with ease, the Surfer smashes their way off the planet and returns Nova to Galactus. With some convincing by both the Surfer and Nova, Galactus decides to end the Surfer's punishment and he removes the barrier around the Earth. Finally free, and having his powers restored to full, the Surfer happily soars through the cosmos.