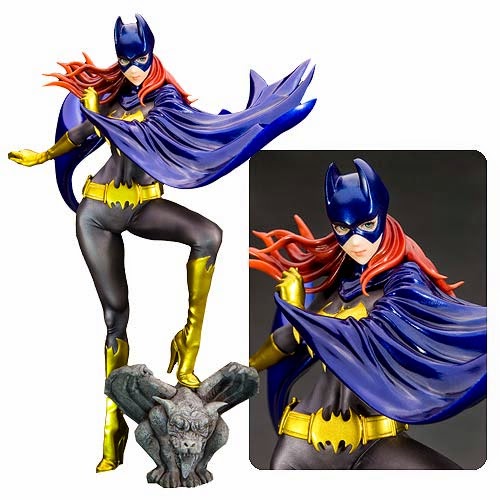 Batgirl was the first of the DC bishoujo statues that combine DC’s superheroines and villainesses with traditional Japanese styling, and now she’s back, looking as striking and fearsome as ever in this DC Comics Batgirl Bishoujo Statue. This striking piece features Barbara Gordon in her traditional black-and-yellow costume, with a distinctive dark blue cape and cowl. The statue appears mid-movement, with Batgirl coyly spinning her cape. Her long red hair flows in the wind, framing her bishoujo-style face, and she has one foot perched on an exclusive Gotham City gargoyle base to accentuate her long legs. Don't miss out - get yours today!

Batgirl gets the Ame Comi makeover!
Barbara Gordon goes bishoujo in this Batgirl Statue!
Detailed, beautiful Batgirl sculpture on an exclusive Gotham City gargoyle base.
Catch her if you can!

The Batgirl Ame Comi Bishoujo Statue from Kotobukiya is the first in a line combining DC's superheroes and villains with traditional Japanese styling. Barbara Gordon stands with one foot resting on a gargoyle, accentuating her long legs, while she shyly spins her cape in front of her. Batgirl's long-flowing red hair is a striking contrast to her dark-blue cape, especially as they both frame her beautiful bishoujo-styled face. This Batgirl Statue stands about 9-inches tall (1:7 scale) with an exclusive Gotham City gargoyle base. Catch her if you can!