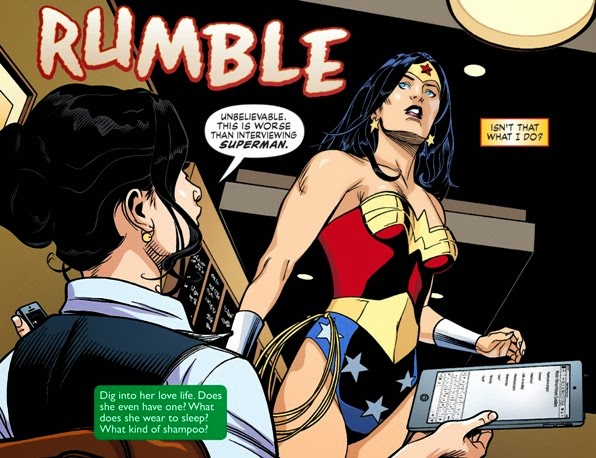 With so much going on in the DC Universe and the mega-event Convergence looming on the horizon, it’s easy to lose sight of the amazing digital first comics coming out every week. You don’t want to do that, and you particularly don’t want to fall behind on Sensation Comics Featuring Wonder Woman, which has become one of the most original, cutting edge and flat-out fun comic books that we’re publishing right now.

You don’t need to be familiar with Wonder Woman’s continuity, backstory or supporting cast to understand it. In fact, all you really need is an interest in compelling, unique super hero storytelling. The fact that it stars one of the most popular characters in pop culture who almost never gets the anthology treatment is just gravy—but admittedly, pretty awesome gravy. After all, it’s the chance to write or draw a Wonder Woman tale that has drawn such a cool collection of creators to Sensation Comics.

Case in point, Sensation’s newest creative team: Writer Cecil Castellucci, Penciller Chris Sprouse, Inker Karl Story and Colorist Jordie Bellaire. Castellucci is a popular YA novelist and comic writer who is probably best known (at least around here) for her MINX series, The Plain Janes. Sprouse, Story and Bellaire are the art team behind the recent Tom Strong. What’s a Wonder Woman tale conceived by these very different creative forces look like?

Guest starring Lois Lane, the two-part “Girls’ Day Out” reveals what happens when two of DC’s most famous female characters connect for an interview. It’s smart, whimsical and fun. It makes you wonder why these two don’t team up more often. And it’s an absolute must-read for anyone looking for strong, positive female-driven super hero comics.

In the spirit of their story, we decided to sit Castellucci and Sprouse down for a little interview of our own. Enjoy…

Cecil Castellucci: One of my favorite things about Wonder Woman is how much care and love she has for humanity. I think that it is extremely brave of her to leave her island and forge her own life. It takes guts to leave what you know and go to a place where you are the unknown. I also think that her strength comes not only from her superpowers, but also springs from her amazing sense of self. She knows exactly who she is and she makes no apologies for it. She's singular, but while she's so different, she's relatable to us mere mortal women. Wonder Woman shows us all that we have our rare particular talents and our turn to shine. Sometimes it's only Wonder Woman who has the skill set that can save the day. As a lady, I appreciate that.

Chris Sprouse: I've always loved the mythological aspect of the character. Wonder Woman is not just a female Superman—she's a god! She's not a human being, and I like the way Cecil played her in our story: she's a stranger in a strange land.