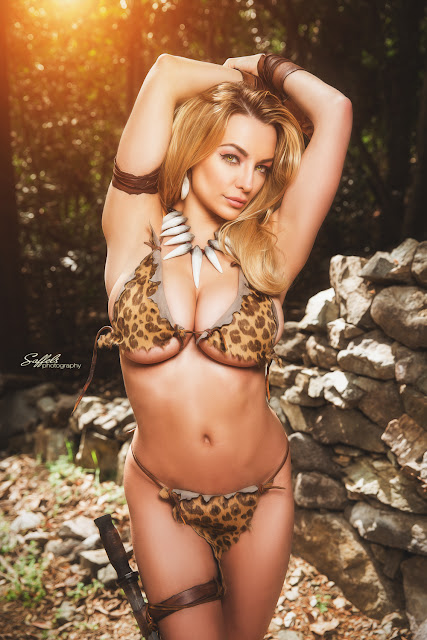 Dynamite Entertainment is proud to announce their agreement with rights holders Galaxy Publishing and Valdoro Entertainment to publish original comic book and graphic novel content for Sheena, Queen of the Jungle, as well as reprints of the character's classic jungle fantasy material. Described by co-creator Will Eisner as a female counterpart to Edgar Rice Burroughs' Tarzan, Sheena will see her first adventure at Dynamite Entertainment teaming with the iconic "Lord of the Jungle" himself. Dynamite's rights also include statues, trading cards, action figures, lithographs / fine art, and t-shirts.

"Sheena is one of the first-ever jungle heroines, a hypnotic character who has captured the hearts and imagination of fans throughout the decades," says Nick Barrucci, CEO and Publisher of Dynamite. "Her long-running series in the 1940s and 1950s established her as a powerful and wild character, a welcome role reversal of traditional jungle action tropes who spent much of her time saving hapless men in distress. We're thrilled to add Sheena to our line, and we are honored that we are able to make her first adventure a historic one which will bring her - for the first time ever - face-to-face with the archetypal jungle hero, Tarzan!"

Valdoro President Steven E. de Souza, whose many screen credits include Commando, Die Hard, and Tomb Raider, says, "I've been lucky enough to work on some immensely popular, action-packed series. Thanks to Dynamite, Sheena will join them - starting with this crossover that's a fanboy's dream. Hats (or is that pith helmets?) off to Nick and his team!"

Galaxy President Paul Aratow, who in addition to Sheena, also brought Will Eisner's other famous creation The Spirit to Hollywood's attention, says, "When I signed onto this expedition with the Queen of the Jungle, I never could have imagined that the Lord of the Jungle himself would board our safari! Thanks to all who made it happen!"

"When you consider the depth of the legends of Sheena and Tarzan, you wonder why this hasn't been done before," says Jim Sullos, President of Edgar Rice Burroughs, Inc. "We're looking forward to the exciting adventure that Dynamite will create with this crossover. It will become a classic. I've already reserved my copy."

Sheena, Queen of the Jungle was created by industry legends Will Eisner and S. M. "Jerry" Iger, and debuted in the UK publication Wags #1 in 1937 (reprinted a year later in the United States in the pages of Jumbo Comics #1). She was the first female comic book character to carry a dedicated series, preceding Wonder Woman #1 by four years, and her series spanned 167 issues and twenty years. Sheena began her fictional existence as an orphan raised by a shaman in the jungle, perfecting her survival skills and mastering the ability to communicate with animals. Her many adventures brought her into conflict with evil hunters, slave traders, and rampaging wildlife. The character has thrilled audiences in several television and film adaptations, including portrayals by actresses Irish McCalla (1955-1956), Tanya Roberts (1984), and Gena Lee Nolin (2000).

Dynamite Entertainment has a long history of publishing jungle fantasy and pulp adventure, making it the perfect home for Sheena, Queen of the Jungle. The iconic hero Tarzan appeared in the company's Lord of the Jungle series, as well as the related title Lords of Mars. Dynamite has also published Frank Cho's Jungle Girl, the Frank Frazetta-created Thun'Da, King Features Syndicate's The Phantom and Jungle Jim, Alan Quatermain (of King Solomon's Mines) as a supporting cast member in Prophecy and Savage Tales, and Turok: Dinosaur Hunter.

Dynamite's Sheena, Queen of the Jungle comics will be solicited in upcoming editions of Diamond Comic Distributors' Previews catalog, the premier source of merchandise for the comic book specialty market. Comic book fans are encouraged to reserve copies of Sheena-related projects with their local comic book retailers. Individual customer purchases will be available through digital platforms courtesy of Comixology, Dynamite Digital, iVerse, and Dark Horse Digital. Fans and retailers are encouraged to follow Dynamite Entertainment's official social media channels for the latest updates regarding project development and release dates.
By Ken Hulsey at July 09, 2015