Captain Marvel: I'm learning to fly, but I ain't got wings Coming down is the hardest thing 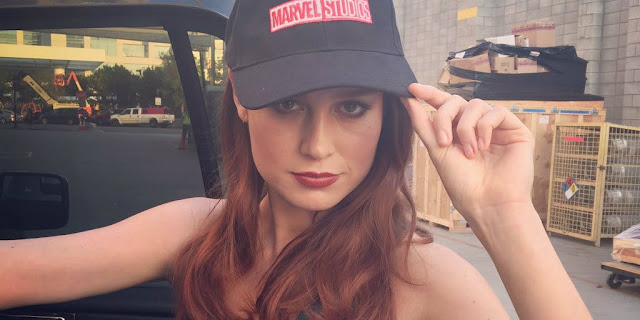 There are some truly exciting Marvel movies on the horizon, one of which is CAPTAIN MARVEL, which will finally bring Carol Dancers (Brie Larson), an Air Force pilot who was involved in an accident with an alien which imbued her with the superpowers of strength, energy projection, and flight, into the Marvel Cinematic Universe. Production on CAPTAIN MARVEL will be getting underway soon, but Brie Larson has been at the Nellis Air Force Base in Nevada for several days training for the role, and the actress posted the following photo on Instagram to state that she's "learning how to fly."

During San Diego Comic-Con last year, Marvel Studios president Kevin Feige said that CAPTAIN MARVEL would take place in the 1990's and find Carol Danvers battling the Skrulls, a race of alien shapeshifters. Samuel L. Jackson will be reprising his role as Nick Fury, with Jude Law, Ben Mendelsohn, and DeWanda Wise also set to star in the film. As CAPTAIN MARVEL will be taking place before much of what we've seen in the MCU, Samuel L. Jackson has said that we'll see Nick Fury with two eyes. "We’re going back now, and I meet Captain Marvel in more of an origin story," Jackson said. "You’ll see Nick Fury with another guy’s face, somebody that’s got two eyes, so that’s a whole big deal. You’ll see. It’s prior to the eye injury, no eye patch." It's likely we'll see just how Nick Fury was injured in CAPTAIN MARVEL, but for now, we've just got Fury's explanation from CAPTAIN AMERICA: WINTER SOLDIER to go on; "Last time I trusted someone I lost an eye."