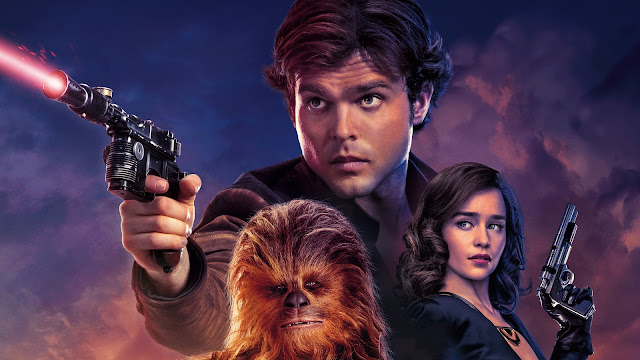 Let's just cut to the chase, Solo is a really, really, really good movie. I absolutely loved it. It was just the thing I personally needed to wipe the awful memories of "The Last Jedi" from my dorky brain. It is an all-around solid movie with a great story, acting and effects. It also contains enough plot twists and a special cameo that I really want to talk at length about, but can't in fear of ruining the movie for you, to make the movie highly entertaining.

Here is the bottom line, Alden Ehrenreich was really believable as Han Solo. This is of course the most important aspect that makes "Solo" as good a movie as it is. Ehrenreich owned the role and put his own unique take on it. He captured enough of Harrison Ford's mannerisms to effectively portray the character without making his performance an over exaggerated impression. It was very easy for me to accept Ehrenreich as Han Solo and by the end of the film I was completely sold and am now quite looking forward to the future installments with him portraying one of my favorite movie characters.

The rest of the cast was excellent from Woody Harrelson, Emilia Clarke (Just try to keep your eyes off her ... holy smokes) to much talked about Donald Glover as Lando Calrissian. Glover doesn't steal the show, which is actually a good thing, but ads a whole new level of charm and wit to the suave Calrissian.

Visually "Solo" is an amazing feast for the eyes. I marveled at just how good the special effects were. Star Wars films have always been a showcase for effects and I have to say that this movie looked as real as real could be. This movie will be able to stand the test of time much better than the prequel films, which in my opinion, are starting to look very cartoonish as time passes.

Here's where I rank Solo in the pecking order of Star Wars films. I would honestly put it behind "Return of the Jedi" and in front of "The Force Awakens". Okay so here we go:

Actually you could insert anything Star Wars related between twelve and thirteen, which shows just how much I loath "The Last Jedi."