A Look Back At The First Issue Of The Walking Dead 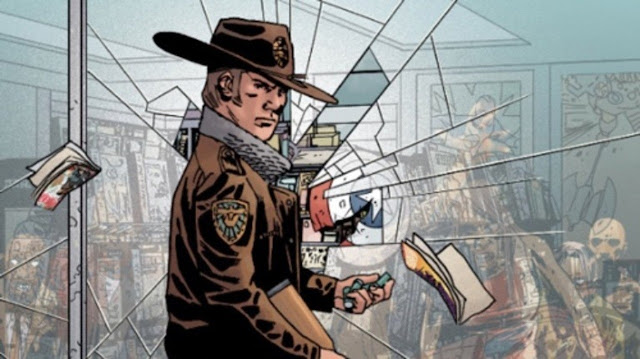 When was the last time you read The Walking Dead #1?

I originally read it back in 2003 shortly before it went to press, and while I remember liking it, I don’t think it occurred to me then just how good it was. When we received copies at the Image offices, I recall admiring how well the greytones printed and thinking that it was a sharp looking book, but at the time it was just one of several series we were debuting that October as a part of a new horror line. I was Image’s Director of Sales & Marketing at the time, and my primary concern at that point was making sure people knew it existed.

Even if you haven’t read The Walking Dead, you probably know that it’s a series about mankind’s struggle for survival in a world overrun by the living dead—or as Robert Kirkman once put it, a “zombie movie that never ends.” What makes it different from zombie movies, though—and from the myriad other zombie comics released both before and after The Walking Dead—is that it’s actually less about the threat imposed by the zombie than it is about us. There is violence, and there is gore, and yes, there are literally thousands of zombies over the course of the series, but at its heart, The Walking Dead is about the good and bad in all of us, and our will to keep going, even in the most hopeless of situations.

If you have read The Walking Dead over the last 187 months that lead up to the series’ conclusion in today’s issue #193 (yes, the math is screwy), you probably have a sense of what the book is at its core, and the sacrifices that have been made for survival. What makes this series so great, though, and what makes its first issue so extraordinary, is that no matter what’s happened over the last 15 1/2 years, The Walking Dead #1 tells you everything you need to know about this horrifying new world in a mere 22 pages.

A quick summary of the first issue is perhaps in order: 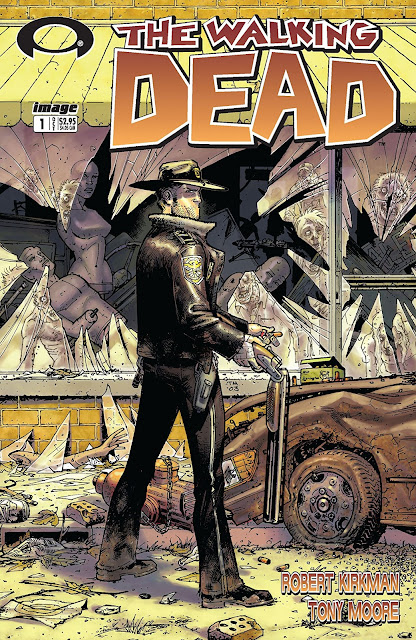 Cynthiana, KY Police Officer Rick Grimes awakens from a coma following an injury sustained in the line of duty. The hospital is empty, and as he attempts to find someone to help him and explain what’s going on, he encounters a number of zombies—or “walkers,” as we come to know them over the course of the series. Fleeing the hospital, Grimes discovers the whole city is virtually deserted, but as he approaches his home neighborhood, he spots a disabled walker writhing in pain on the side of the road. The horror that has befallen the world hits Rick hard, but he pushes on.

Upon reaching his neighborhood, Rick's knocked unconscious by an unseen assailant, only to wake up a second time, in the home of Morgan Jones and his son Duane. Morgan feeds Rick and explains that Duane whacked him with a shovel because he thought he was a walker—noting that the quickest way to stop a walker is a blow the head. Morgan shares as much information about the state of the world as he can, but the truth is, no one knows what happened. People were directed to make their ways to larger cities for protection, but Morgan felt like staying in a small town was safer. Rick explains that he’s looking for his wife and son, and he hopes they went to join his in-laws in Atlanta.

After this exchange, Rick takes Morgan and Duane to the police station, where they stock up on weapons and grab a couple vehicles. Morgan expresses concern over taking a police car, but Rick files the loaner under “protect and serve”—Morgan and Duane are going to need the car to survive; they just need to return it back when things “get back to normal.” As they’re leaving, a walker approaches outside the fence surrounding the compound. Rick prepares to shoot, but Morgan cautions him against doing so—he may need the bullet later, and the sound of the gunshot may attract more walkers.

After Rick parts ways with Morgan and Duane and begins the drive to Atlanta, he passes the spot where he saw the disabled walker earlier in the day. The walker is still in the same spot, twisting in agony. Realizing the walker is essentially trapped in this spot forever, Rick mercifully opts to ends its suffering with a quick shot to the head. As “life” fades from the walker’s eyes, Rick is overcome with emotion, but he wipes his eyes, gets back into his car and drives on into the night.

I’m not doing that justice—you’re better off just reading the comic—but if you’re wondering what makes all that so perfect, it’s simple. The Walking Dead #1 is the beginning of the series, but it also works just fine on its own. Rick’s clearly beginning a long journey into a harrowing new world, but even if you never read another issue, these 22 pages form a good story in their own right. Better still, the story is compelling enough that it leaves the reader wanting more.

On the surface, that’s an unremarkable achievement, because historically, that’s how comic books are supposed to work: The characters are introduced, and their situation is clearly established. Conflict is introduced, suspense is built, the story reaches a climax, and we have a resolution.

Even as far back as 2003, though, our medium had somehow lost touch with the nuts and bolts of how the best episodic fiction worked, and developed storytelling habits that were geared less toward sustaining interest in monthly comics than they were with selling readers graphic novels on a kind of installment plan.

Robert Kirkman understood, however, that if THE WALKING DEAD was ever going to be collected as a graphic novel, then it had to succeed as a monthly comic. He knew he had to hook people with his first issue, just like showrunners for television shows seek to hook first studio executives and then viewers with a pilot. It’s not rocket science, but it’s something comics have become remarkably bad at over the years as our industry bristles at the “restraints” placed on comics by the monthly format.

In capable hands, though, the monthly format is merely a challenge and not a restraint. THE WALKING DEAD—one of comics’ greatest success stories over the years since its debut, is proof positive of that, not just because it began with an excellent first issue or because Robert understood basic storytelling rules, but because every issue was an invitation to come back for more.

So, whether you’re mourning the series’ conclusion with today’s issue, or you’re one of the holdouts who has spent a decade and a half resolutely refusing to give THE WALKING DEAD a try, I highly recommend finding a copy of the first issue and giving it a read.

Even if you’ve read it before, I think you’ll find yourself wanting to dive right into the next issue and then the next after that, and if you’re unfamiliar with the adventures of Rick Grimes, his family, and his friends, I think you’ll find there’s much, much more to THE WALKING DEAD than just people fighting zombies. - Eric Stephenson

Volume 2 - 2nd printing. Collects Walking Dead (2003 Image) #49-96. Written by ROBERT KIRKMAN. Art by Charlie Adlard. Cover by Charlie Adlard and Cliff Rathburn. Returning with the second eight volumes of the fan-favorite, New York Times Best Seller series collected into one massive paperback collection! This is the perfect collection for any fan of the Emmy Award-winning television series on AMC: over one thousand pages chronicling the next chapter of ROBERT KIRKMAN's Eisner Award-winning continuing story of survival horror- beginning with Rick Grimes' struggle ...

Volume 17 - 1st printing. "Something to Fear!" Collects THE WALKING DEAD #97-102. Written by ROBERT KIRKMAN. Art and cover by CHARLIE ADLARD and CLIFF RATHBURN. In this volume of the NYT bestselling survival horror, Rick and his band of survivors work to build a larger network of thriving communities, and soon discover that Negan's "Saviors" prove to be a larger threat than they could have fathomed. Crossing Negan will lead to serious, dire consequences for the group; it seems that for the first time since the Governor's reign of terror that Rick ...

Volume 18 - 1st printing. "What Comes After!" Collects THE WALKING DEAD #103-108. Written by ROBERT KIRKMAN. Art and cover by CHARLIE ADLARD and CLIFF RATHBURN. Following the events of SOMETHING TO FEAR, Rick and the other survivors accept a new way of life under Negan's rule, but not everyone agrees....

Volume 19 - 1st printing. "March to War!" Collects THE WALKING DEAD #109-114. Written by ROBERT KIRKMAN. Art and cover by CHARLIE ADLARD. Rick. Ezekiel. Gregory. Negan. Each man holds the fate of their community in their hands... and WAR is on the horizon.