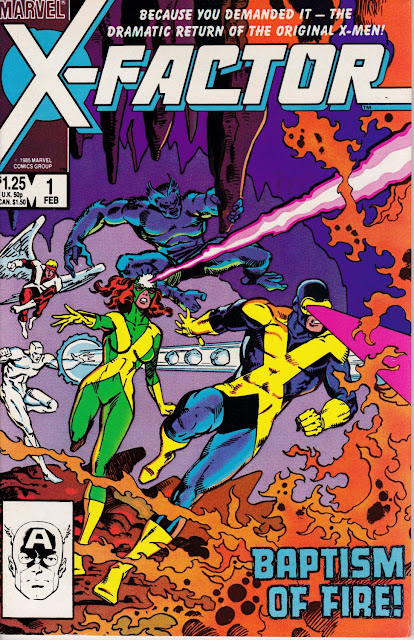 Anchorage, Alaska, Scott Summers is outside chopping wood with his optic blasts when he's asked to come inside by his wife Madeyline Pryor so that he can watch their son Nathan while she runs some errands. However, upon entering their family home, Scott is distracted by a television report about the possible Mutant Menace and the government considering the idea of making all mutants register. When Maddie notices this she becomes angry and berates her husband for worrying over mutants and reminds him that he is no longer an X-Man and that he should be focusing more on his family than on the fates of mutant kind. That night when she notices Scott standing outside on the balcony brooding again, Madelyine goes out and apologizes for snapping at him earlier. She expresses her frustrations at the problems their marriage has been having, especially in light of the fact that Scott wasn't there when she gave birth to Nathan. When she asks Scott if their troubles have anything to do with Jean Grey, when he says yes she says no more and grimly returns to bed.

The next day in the New Mexico rockies, Angel, Iceman and Beast are preparing to move on with their lives after the disbanding of the Defenders. With Hank accepting a position at Empire State University and Bobby accepting a job at a new accounting firm it looks like Warren and Candy are going to be left alone, despite Warrens attempts to get his friends to stay and try a new super-hero team, and possibly going back to their roots as X-Men and try to improve human/mutant relations. After saving some construction workers fixing Warren's home, Beast and Iceman pay their leave. No sooner have they left then there is a call on the phone for Warren, on the other end of the line is something that Warren finds almost impossible to believe. With no time to explain things to Candy, Warren flies off on a direct line to New York City.

In 1963's UNCANNY X-MEN #1, Professor X made history when he brought five mutant teens together to not only train them in how to use their powers, but also present a positive message to the rest of the world about mutantkind. That group, of course, consisted of Scott Summers, Jean Grey, Hank McCoy, Bobby Drake, and Warren Worthington III—otherwise known as Cyclops, Marvel Girl, Beast, Iceman, and Angel!

That core crew, created by Stan Lee and Jack Kirby, grew up together and spent years fighting the likes of Magneto, the Brotherhood of Evil Mutants, the Sentinels, Juggernaut, and many others. However, surprisingly, the series itself didn't do so well, so it became a reprint comic with 1970's issue #67 all the way through mag #93 in 1975!

Though the X-Men ceased to be a headlining group, that didn't stop the members from continuing to save the day in other books. Beast joined the Avengers for a time, while Iceman and Angel became Champions and Defenders (with Beast joining the latter group down the line). The X-Men did make a triumphant return in 1975's GIANT-SIZE X-MEN #1 with Cyclops working with a new team that carried over into UNCANNY #94. Jean Grey also rejoined that squad, though she seemed to perish thanks to the Phoenix Force.

Scott Summers had married a woman named Madelyne Pryor, who looked an awful lot like Jean Grey. He served with the time faithfully—that is, until Professor X disappeared in UNCANNY X-MEN (1963) #200. In the following issue, Madeylne gave birth to their son Nathan and Scott lost a fight with Storm to decide who would lead the team. Feeling out of place, Scott, Madelyne, and Nathan moved back to their home in Alaska.

Meanwhile, DEFENDERS (1972) came to an end in 1986 with issue #152 which freed up Angel, Iceman, and Beast. Warren had no ill will about leaving the hero world behind, but his pals weren't exactly thrilled about trying to enter the work force. But everything changed for those four mutants in the pages of two other books. In AVENGERS (1963) #263 by Roger Stern and John Buscema, a plane crashed in the water near J.F.K. airport and a huge burst of energy erupted. When the team investigated, they found a strange capsule-like object. It defended itself at first, but the heroes got it back to the mansion where readers learned that it held none other than...Jean Grey!

Then, in FANTASTIC FOUR (1961) #286 by John Byrne, Reed Richards and company showed up at the mansion and he got invested in the mystery of the capsule. Jean Grey burst out, expecting to fight Stephen Lang and his robots, which originally happened in UNCANNY X-MEN (1963) #100. At the end of that issue, Jean flew the escape pod as it seemed to burn up on re-entry. In the following ish, it seemed as though the Phoenix Force had taken over Jean's body, but in reality it made a copy and took on her personality. So, when the Phoenix offered up her own life in UNCANNY #137, the real Jean Grey was still healing in that pod in the river!

Grey regained some of her memories after going to her parents' house and retrieving the Holempathic Matrix Crystal the Shi'Ar bestowed on them. With that, Reed called up Warren Worthington III which brought the millionaire soaring to the Big Apple in 1986's X-FACTOR #1 by Bob Layton and Butch Guice! Warren then contacted Scott who walked out on Madelyne and Nathan to see Jean again.

She had no intention of going back to the X-Men if Magneto was on the team, but also knew that something had to be done about the growing anti-mutant sentiment. Warren got to work on the idea and a few weeks later he called Bobby and Hank to his new Lower East Side headquarters where they reunited with Jean! Once they convinced Scott to come back with them, the team heard about Warren's plan. With some public relations help from Cameron Hodge, X-Factor would pose as humans tracking down mutants, train them to use their powers and then get them back into normal life.

Thanks to Warren's backing, they had plenty of funding and began saving the likes of Rusty Collins, Artie Maddicks, Leech, Rictor, Skids, and Tabitha Smith. Eventually, they realized that their ruse caused more anti-mutant sentiment, which was actually part of Hodge's plan as a member of the mutant-hating group, the Right!

Louise Simonson became the regular writer with issue #9 and would shepherd the squad through some rough times as they faced Apocalypse, saw Angel turned into Archangel, learned the dark truth about Madelyne Pryor, and witnessed the early moves that would turn Nathan into Cable. In the wake of the "Muir Island Saga" story, the originals returned to their original series and with issue #71, X-FACTOR began focusing on a government sponsored team featuring Quicksilver, Havok, Polaris, Strong Guy, Multiple Man, and Wolfsbane.

Uncanny X-Men This is Forever

This is Forever: Part 2 - Written by Matthew Rosenberg. Art by Salvador Larroca. Cover By J Scott Campbell, After the devastating events of 'X-Men Disassembled,' it falls to Cyclops to rebuild the X-Men in the face of overwhelming hatred...

Following their near defeat by the White Queen and fearing that the mansion is no longer safe for them, Cyclops takes the team to the former X-Man Angel's aerie in New Mexico. He asks to talk to Angel privately, who then flies him to the top of a butte out in the middle of the desert (much to the chagrin of Professor X...

Jean attempts to help Rusty control his fire-starter abilities. Plus, the Beast is kidnapped, and the rest of the team must face off against Tower, a mutant with the ability to shrink and grow to gigantic size and strength.

Later this summer, Jonathan Hickman is bringing the X-Men into a new era with HOUSE OF X and POWERS OF X. But this isn’t the first time that Marvel’s mutant heroes have dramatically changed the game, and Marvel veterans have been reflecting on the events that brought us to this point. Adam Kubert has already left his mark with unforgettable runs on WOLVERINE ...