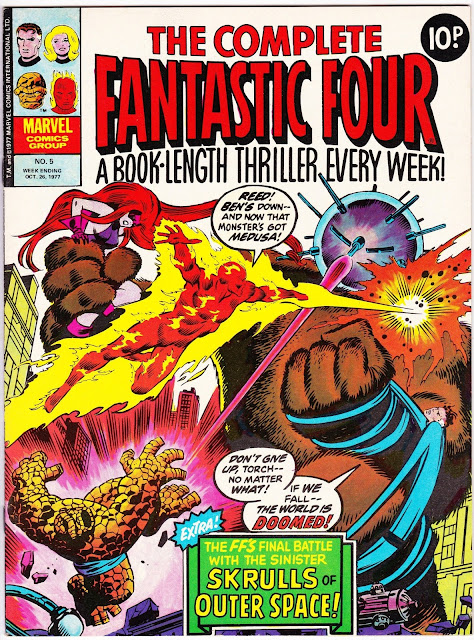 The Mighty World Of Marvel (commonly shortened to MWOM) was a British comic book series published by Panini Comics. Initially debuting on 30 September 1972, it was the first title published by Marvel UK and ran until 1984. The series was revived in 2003 by Panini Comics, who are licensed to reprint Marvel US material in Europe, and was published monthly until November 2019.

Spending much of the 1970s as Marvel UK's flagship title, MWOM published black & white reprints of American Marvel four-colour material. Thanks in large part to the success of MWOM, Marvel UK gained a foothold in the (at the time) vast UK weekly comic market, allowing the company to cross-market and later introduce non-superhero UK-reprint titles such as Planet of the Apes and Star Wars.

The Complete Fantastic Four was a weekly title launched by Marvel UK on 28th September 1977, and ran for 37 issues until 8th June 1978. The first 36 page issue gave away a free gift of a plastic snap together model of a Boeing 747, while the second gave away a free Boeing Clipper boat plane model. Early issues contained just two reprint strips; early '70s Fantastic Four reprints continuing from their run in Super Spider-Man and 'classic' '60s reprints beginning with Fantastic Four #1 in the backup slot. In later issues, a third strip was included, 'The Invaders'. Following the title's cancellation, both the Fantastic Four and the Invaders moved into the pages of Mighty World of Marvel Vol 1. 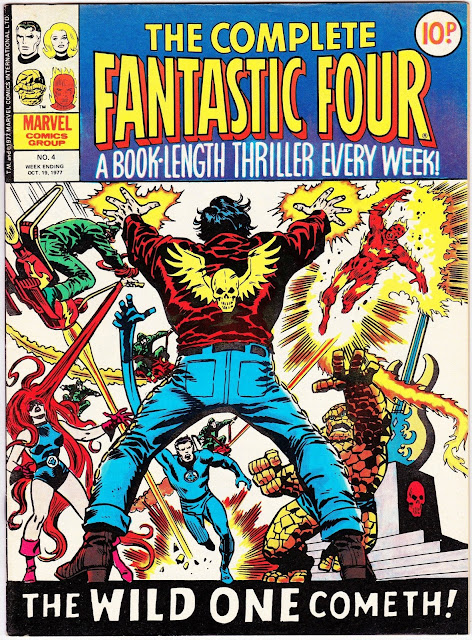 
Rumble On Planet 3; The Thing; The Fantastic Four Fight Back


Searching for the Brain and his ultimate weapon the Warhead, Mister Fantastic and the Thing come across a medieval castle in this strange world based on 1950s pop-culture. By this point they have shaken off the Patriot's mental conditioning that made them loyal to their cause. Trying to infiltrate the castle they are attacked by soldiers that are guarding the ramparts with lances that fire ray beams. Having had enough of this twisted reality, the Thing smashes through the draw bridge and fights through the knights. Suddenly they are joined by the Human Torch and Medusa who are seeking the Warhead on behalf of the Wild Ones. Still under the Wild Ones' influence, the Torch and Medusa fight their comrades as the Brain -- secretly Slugger Johnson the man responsible for this reality warp -- watches on. He complains to the Shaper of Worlds that this reality he has created has not been ideal and that the Fantastic Four appear to have been unaffected by the changes. Tricking the Shaper into thinking that the Fantastic Four are evil, he convinces the alien to unleash the Warehead. 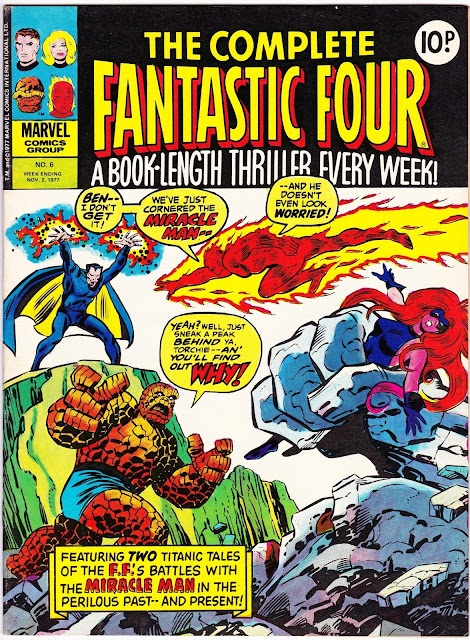 As the Fantastic Four continue to fight among each others, the castle suddenly changes into a drive-in movie theater and the knights in to members of the Wild Ones. Suddenly on the drive-in screen appears footage of a monster movie which features a giant monster with an ape-body and Sputnik for a head. It eventually passes through the movie screen and out into reality prepared to attack everyone in sight. Witnessing this from their bomb shelter are Senator McHammer and his Patriots. He orders the Patriots to gear up and head out to claim the Warhead for themselves. As they exit, they push back one of the African-American workers on the facility. Finally fed up of being unseen by the Patriots, the black man goes down into the basement of the facility where his people live in squalor. He tells his people that they should not longer live in poverty and rise up and show McHammer and his people that they are equals.

Back at the drive-in, the Fantastic Four and the Wild Ones battle the Warhead but fail to gain any ground when suddenly the Patriots arrive in their flying cars. At that moment the mental conditioning between Johnny and Medusa begin to wear off and they agree to help Reed and Ben stop the menace of the Warhead. Seeing the Sputnik on the Warhead's shoulders as its weakness, the Thing flags down one of the Wild Ones and hops on his bike. Flown up to the monster's head, Ben jumps down and smashes it with his strongest punch. The Sputnik shatters causing the Warhead to explode as it falls back through the movie screen.

With the battle over the Wild Ones and the Patriots confront each other. During the heated exchange the leader of the Wild Ones tells McHammer that they need the "Youthies" because nothing lasts forever in society. This proclamation is agreed with by the approaching group of African-Americans. Their leader begins demanding that they be given their civil rights and that the fifties must end to give way to the sixties. As the black man forces McHammer and his people face their consciences, they begin to fade from existence. The Shaper of Worlds appears and announces that his experiment is over and it has ended in failure. He explains that he is leaving Earth, but will be curing Thomas Gideon and taking him along in order to provide the dreams that the Shaper needs to shape reality. As the Shaper teleports away as he restores reality to normal. The Fantastic Four find themselves back aboard their carious crafts heading back to New York City.

Just in case you were interested, DC Comics also printed comics in magazine form in the UK. 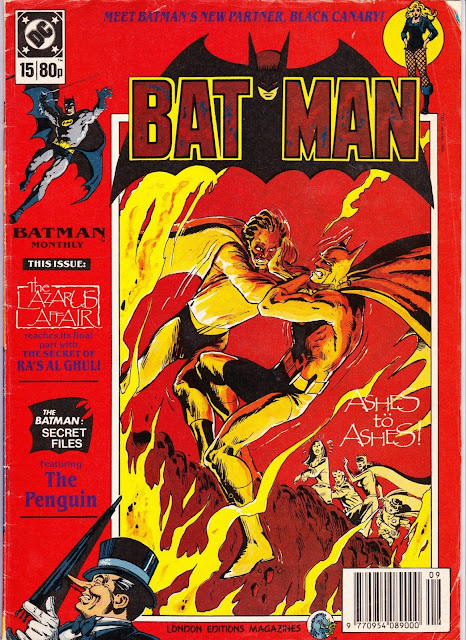 Reprints of Batman #335 and The Brave and the Bold #166. Batman Monthly was launched by London Editions Magazines, later Fleetway Editions, in July 1988 and ran for 56 issues until February 1993. It was then relaunched for a further volume of 11 issues from March 1993 to January 1994. Then the series was merged with Fleetway's Superman title and the numbering restarted again under the title Batman & Superman; this lasted another eleven issues. All issues featured reprints of American Batman stories, with the first two years worth focusing largely on stories from the 1970s and early 1980s (and the occasional older story) and later issues bringing the character more up to date with stories from the late 1980s and early 90s. The first issue carried a free gift of a cover-mounted Batman badge. Batman Monthly also spawned an intermittent series of Specials, Batman Monthly Presents, featuring characters such as the Joker and The Penguin. A must have for all Batman collectors!