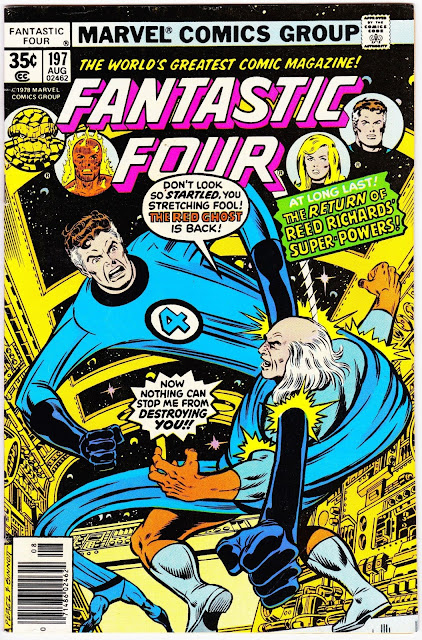 Garbed in his Fantastic Four uniform, Reed Richards stands next to a small space rocket at the Cynthian Associates research facility. At his side is his captor, the supervisor of the complex. Reed asks him why he is willing to pay out a fortune to help Reed reacquire his stretching power. What does he want in return? The man does not answer but simply states that if Reed does not do as he is told, his teammates will be killed. Reed declares that his calculations are complete and that he is ready to take off, and asks to see his wife and friends before he leaves. The supervisor declines, stating that they will remain his prisoners until Reed returns repowered. Then Reed climbs the ladder into the shuttle-craft and straps himself into his seat. For months, he muses, he fantasized about regaining his powers, but he realized that it would take the resources of a small country to do so. Now, as his dream seems to be coming true, Reed wonders who the mysterious person is who financed the operation, and to what end. And why, Reed wonders as the ship lakes off, does the supervisor seem so hauntingly familiar?

Dismissing these thoughts, Reed turns his attention to the compu-screens. The supervisor reports to Dr. Doom that Reed is on his way. With a rasping laugh, Doom declares that Operation: Coronation is proceeding on schedule. It is time to return to Latveria, he says, where the destruction of the Fantastic Four will take place and where he will become the ruler of Earth. In space, Reed discovers that his ship's controls are all present so that he can make only a minor course alterations. His costume, which the supervisor returned to him, feels quite comfortable, like a second skin, even though it nas been a long time since he has worn it. As he monitors his trajectory, however, he remains unaware of a strange scarlet mist that envelops the ship and seeps into the cabin. Awaiting the moment when he must deploy the adjusting pods, he wonders why he and his teammates received superhuman powers from cosmic radiation but astronauts after them did not. Then he discovers a very slight course error that he corrects in time. When he disengages the equating pods, he muses, everything must be exactly as it was that day years ago. Otherwise, the cosmic rays could turn him into anything from a monster to a microbe.

Fortunately, the compu-screens register zero divergences and in a few seconds the pods position themselves correctly. It has taken years, thinks Reed, to prove his hunch that the cosmic rays that showered them then were slightly altered by heightened sunspot activity, a flaring of the Van Allen Belt, and an increase in neutron activity. If this chain of events is precisely recreated, then Mr Fantastic will live again. Tense, Reed switches on the Cosmic Ray Collector and waits. Suddenly he feels the rays slicing through him, and his head starts to pound with pain—exactly like before, he shouts. As the rays bombard the ship, his stretching power returns, and he quickly extends across the cabin to steer the ship out of the radiation before it becomes overpowering. Fighting the ray-induced lethargy, Reed squeezes the collector switch, and then he passes out. Unconscious, he does not see the other person in the ship with him, who entered as a scarlet vapor and was also irradiated. His atoms reintegrated, the Red Ghost—the Fantastic Four's mortal foe— materializes next to Reed. As Ben, Johnny, and Sue regain consciousness in Doom's Latverian castle, they see Doom at his piano playing a Wagner composition. Doom explains that Ben is held prisoner in a power compressor. The more energy he uses trying to escape, the harder the machine holds him then Doom orders his guards to bring in the 'artist," and when Alicia Masters enters, Ben becomes furious. Doom declares that she has not been harmed. She is a brilliant craftsman, and such people are welcome to roam the kingdom then Doom says that the Human Torch is trapped in a liquid prison that keeps him from using his flame, while Sue is imprisoned in a power dampener. Alicia tells Ben that Doom has promised their freedom once She completes work on Doom's statue.

Then Doom removes a cloth from the massive golden likeness of himself. Only the face remains incomplete, and Alicia must use her talent to sculpt it as it appeared before Doom's fateful accident. Doom removes his mask so Alicia can run her sensitive fingers over his face, and as she does, she remarks that she can feel that he is basically a good man whom circumstances have twisted into a man filled with hatred and suspicion. Doom says that she is mocking him and pushes her away. Then Sue asks him why he is going to such trouble to make the statue. He replies that he has ruled Latveria for many years, transforming his countrymen from peasants into a proud people. Later this week, because of the laws of Latveria, he must abdicate his throne in the Ceremony of Coronation. As the supervisor of Cynthian Associates enters the chamber, Doom says that the statue will be donated to the United Nations then Doom introduces the man to them and declares that the scepter of power will be turned over—to his son.

In outer space the Red Ghost congratulates the unconscious Reed for succeeding beyond anyone's wildest dreams. He exults that his powers are now greater than ever, and he will no longer need his unpredictable Super-Apes. Holding Reed's head, the Ghost recalls their early battles on the moon. Then he remembers his last battle, in which Iron Man used a Cosmitronic Cannon to disperse the Ghost's atoms throughout the galaxy. Fortunately, he says, he was able to draw his atoms together mentally. He circled the Earth as a scarlet mist, seeking the cosmic rays that would restore him. When he saw Reed's ship, he instantly divined its purpose. Not only did he regain his powers, but they have been considerably increased. But Reed revives as the Ghost is gloating and slams him with a massive, spiked fist. Incredulous, the Ghost staggers away and shoots a meteor-smasher at Reed, but Reed absorbs the missiles in his elastic body and snaps them back. The Ghost quickly turns intangible, so the missiles pass through him to explode against the bulkhead behind him. Their battle continues for some time, with the Ghost's intangibility power helping him avoid Reed's blows but hindering him from landing blows of his own. Finally, the Ghost realizes that he can make objects other than himself intangible and he dematerializes the floor below Reed. Reed slips through, and then the Ghost solidifies the floor, trapping Reed in between the shuttlecraft's levels. He gloats that the spaceship's orbit will soon decay and Reed will perish in the fiery re-entry.

In Latveria, Doom's "son" reports that control over the shuttle has been lost. Sensors have reported the presence of two life forms aboard, he continues, and the Ship is about to re-enter the atmosphere and burn up. Doom is furious. Alicia is shocked, and Reed's three teammates are horrified. Back in the spacecraft, Reed slowly works himself free of the atoms of the ship's flooring, hoping that the unstable molecular structure of his uniform will allow him to slip out. Fortunately, it is not long before his hands are liberated, and then the rest of his body follows. Just as the Red Ghost finishes blasting apart the ship's computers, Reed enters the chamber and punches him. The Ghost recovers and lures Reed into leaping through the airlock door, which he momentarily dematerializes. This traps Reed in the decompression chamber, and the Ghost declares that Reed will spend his last moments aboard the ship alone. Then he dematerializes himself and passes through the ship's hull into the vacuum outside. It is very cold inside the chamber, and Reed thinks it is ironic that he could freeze to death before the heat of re-entry incinerates him. Desperately, he feels around the walls for some way back to the control panels, and before long he discovers a hairline crack, evidently made when the Ghost used the meteor smasher missiles.

Now that his elasticity has been increased, he can actually squeeze through the incredibly thin orifice, and he manages to stretch to the control panel just in time. On Doom's monitor, however, all Doom and his prisoners can see is the burn-up of the ship. They do not see the small steel canister ejected instants before the blast, nor do they see the SHIELD helicopter pluck the tiny container out of the ocean moments later. Aboard the aircraft, Nick Fury congratulates Reed on getting his radio dispatch out in time. They located him perfectly, he says. Reed requests that Fury takes the Fantastic Four's pogo plane out of storage. He has finally figured out that Dr. Doom is behind everything, he says, and this time nothing will stop him from ending Doom's menace forever.
By Ken Hulsey at November 19, 2020