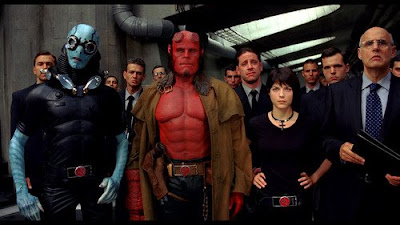 The world's toughest, kitten-loving hero returns to the big screen in Hellboy 2: The Golden Army.

One of the most successful independent comic books of all-time with nearly 15 years and 100+ feature comic books under his belt, Hellboy first ignited the theatrical screen in 2004 taking in more than $100 million at the worldwide box office. The overly muscled occult detective, complete with horns, tail and hard-boiled attitude, was an everyman who'd become a favorite of fanboys around the world, including del Toro. Del Toro introduced the reluctant crimefighter to a global audience with the feature Hellboy, and his film's wit, action and ingenious practical effects launched a critical and commercial hit for comic lovers and general audiences alike.

The filmmaker's epic odyssey continues with the action-thriller Hellboy II: The Golden Army, the feature follow-up to his 2006 triple Oscar®-winning masterpiece, Pan's Labyrinth. Bringing bigger muscle, badder weapons, multitudes of monsters and a little domestic conflict at home, our favorite kitten-loving red hero is back. And this time, he kicks even more evil ass. 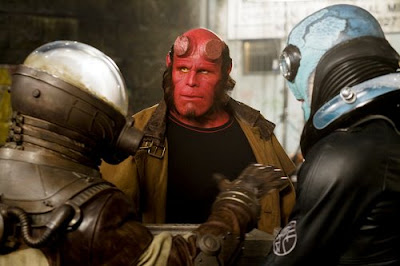 With a signature blend of action, humor and character-based spectacle, the saga of the world's toughest, kitten-loving hero from Hell continues to unfold in Hellboy 2: The Golden Army. Bigger muscle, badder weapons and more ungodly villains arrive in an epic vision of imagination from Oscar®-nominated director Guillermo del Toro (Pan's Labyrinth, Hellboy).

Hellboy fights the good fight when duty calls from his employer: the top-secret Bureau for Paranormal Research and Defense (a clandestine bureau created in 1943 by Roosevelt that uses secret technology, mysterious powers and a network of operatives with otherworldly powers to defend the world against the more violent supernatural- also known as the B.P.R.D.). He would, however, much rather kick back with a cigar, six-pack, his pyrokinetic girlfriend Liz Sherman (SELMA BLAIR of Legally Blonde, In Good Company) and their clutter of cats. But destiny has bigger plans for them.

After an ancient truce between humankind and the original sons of the Earth is broken, all hell is about to break loose. The anarchical underworld Prince Nuada (LUKE GOSS of Blade II, Unearthed) has grown weary of centuries of deference to mankind. He plots to awaken a long-dormant army of killing machines that will return what belongs to his people; all magical creatures shall finally be free to roam again. Now, only Hellboy can stop the dark ruler and save our world from annihilation.

Joining the wise-cracking, amber-eyed demon and his flammable girlfriend are returning principal Hellboy cast-including the bureau's brilliant aquatic empath Abe Sapien (DOUG JONES of Pan's Labyrinth, Fantastic Four: Rise of the Silver Surfer) and B.P.R.D. bureaucrat Tom Manning (JEFFREY TAMBOR of Superhero Movie, Arrested Development). Acclaimed actor JOHN HURT (Indiana Jones and the Kingdom of the Crystal Skull, V for Vendetta) is also back for the latest chapter in the franchise as Hellboy's surrogate dad (and savior from the Nazis) Professor Trevor Broom. New to the team is the now public face of the formerly clandestine B.P.R.D., protoplasmic mystic Johann Krauss, a role shared by JOHN ALEXANDER (Mighty Joe Young, Gorillas in the Mist: The Story of Dian Fossey) and newcomer JAMES DODD; Krauss is voiced by SETH MACFARLANE, creator of FOX's smash-hit Family Guy and the man behind many of that show's signature voices. 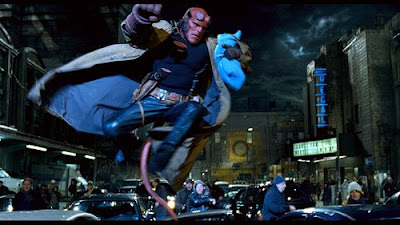 Nuada's merciless drive for revenge is balanced by the regal compassion of his twin, the ethereal beauty Princess Nuala (ANNA WALTON of The Mutant Chronicles, A Girl and a Gun). ROY DOTRICE (Alien Hunter, Amadeus) plays their anguished father King Balor and BRIAN STEELE (Hellboy) portrays the Prince's henchman Mr. Wink, plus multiple additional characters in del Toro's world. Movement artist Jones joins Steele in portraying assorted practical-effects beasts, including the king's highest court Chamberlain and the stunning creature that is the Angel of Death.

For this battle, the B.P.R.D. must travel between the surface strata of the humans and the hidden magical one, where creatures of fantasy rule. And Hellboy, a creature of both worlds who's accepted by neither, must choose between the life he knows and an unknown destiny that beckons.

Hellboy wouldn't be Hellboy without Ron Perlman returning in the title role. Fortunately, the actor was up for getting back into the boots of his favorite role, a character he describes as "a complete underachieving, lazy slob...a beer-drinking, football-watching average American guy who has no desire to be a superhero," explains Perlman. "He just happens to have these abilities commensurate with where he's from and who he is. His idea of a perfect day is pizza and beer and watching The Three Stooges and Marx Brothers movies. His extraordinary superhuman traits are coincidental and not something he aspires to."

Perlman also looked forward to working again with his longtime director. Of del Toro, he states, "The depth of his intellect and accumulated knowledge, based on this voracious curiosity to read anything about why people need to tell stories-including all types of mythology from all cultures-is what sets him apart." Also, he agreed with the filmmaker's fascination to tell this type of story. "Guillermo is a great storyteller, because he understands the need for people to pass down fables and myths, as well as to look at the huge, errors that are made by humans as a result of their frailties and vulnerabilities." 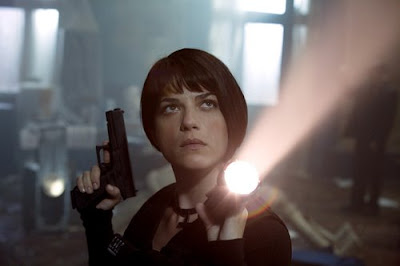 Del Toro also knew Hellboy couldn't return without his sarcastic romantic sidekick, Liz, back for another round of dazzling pyrokinesis. Perlman's partner in crime fighting would again be actress Selma Blair, the only performer the director and producers felt could do Liz justice. Says del Toro, "In the comic, Liz is always very brooding, very dark, distant; she's never relaxed. Selma nailed that."

Blair respected the fact that fans of the comic book and film franchise have a special place in their hearts for Liz. The pyrokinetic remained beautiful, yet untouchable, to anyone for fear that she would accidentally harm them...until she met Hellboy. Blair reflects, "Hellboy has some really die-hard fans, and all of us are grateful that their devotion has given us the chance to tell the story with Guillermo."

Most of the actors spent hours in the chair being fitted with heavy make-up and latex prosthetics to play mythical creatures, except Blair, who couldn't help but taunt her fellow cast members about her simple wardrobe.

She says, "I was very naughty in that department. On the hottest days, when the other actors couldn't breathe in their makeup, I breeze in and say how sweaty I feel in my cotton tank top.

"It's just as well Ron Perlman is my next-door neighbour in real life and knows my sense of humour."

As Liz and Red move into a relationship, they are coping with the same irritations as most couples...plus some unique issues that occur when a recovering demon falls in love with a fire starter. "Petty things are really amplified when you have superpowers," laughs Blair, whose character has finally come to embrace the pyrokinetic energy that used to threaten everyone who came near. "When Hellboy and Liz have a row, it's not just, 'Okay, I'm going for a walk, see you later,'" she explains. "It's more like, 'I'm going to blow up this damn kitchen and will see you later.'" 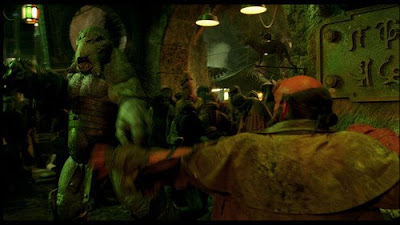 "I have always loved movies where the star is the monster. That has branded my view of art and storytelling all my life," says del Toro. The director demonstrates this devotion to monsters of all shapes and sizes in Hellboy II: The Golden Army. "In the first movie, we did big, big creatures," he says. "One thing I wanted to explore this time was what would happen if the first attack came from tiny creatures that are actually cute."

Hence, the tooth fairies were born. Dainty and almost Tinkerbell-like, the fairies have little else in common with their spritely namesake; they have an insatiable appetite for calcium and are happiest when eating through human flesh to get to it. "Guillermo outdid himself on the cuteness scale with the tooth fairies, but they're nasty little things," says Selma Blair.

Prosthetic creatures abound in Hellboy II: The Golden Army. With more than two dozen of them on set over the course of the shoot, the Hellboy II creature department was one of the production's largest. Spectral Motion from Los Angeles took charge of 15 characters. Solution Studios, Creature Effects and Euroart Studios from the U.K., DDT from Spain and Filmefex from Hungary also made contributions to the horde of trolls, goblins and creatures of the night.

"This is the most massively scaled film I've ever worked on," says Mike Elizalde, founder of Spectral Motion. "It's been challenging, but also rewarding because of the cleverness and relevance to the story that each character has."

After shooting had wrapped and the layers of prosthetics had been peeled away, writer/director del Toro reflected on the draw of the hero with whom he has spent much of the last decade trying to explain: "Hellboy is an unlikely good guy with a blue-collar attitude and a big heart for his family of freaks. I identify with him 100 percent. He has an extraordinary job, but a workman-like mentality. He struggles with inner demons and fights against what others see as his destiny. His is a story of nature vs. nurture, which offers simple but beautiful truths about what it is to be human."

And that is the type of story del Toro best shares. "I would love for people to find within Hellboy movies their favorite monsters," he concludes. "We all need monsters to dream, and that's what we're doing."
By Ken Hulsey - July 10, 2008