David Tennant Officially Announces That He Is Leaving Doctor Who 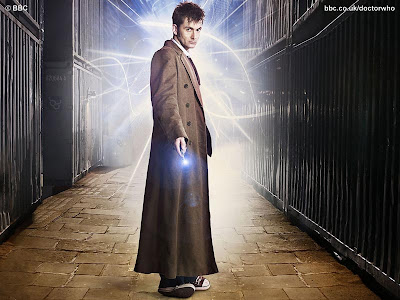 David Tennant has announced that he will leave the award winning BBC One drama Doctor Who when he has completed the filming of four special episodes which will be screened in 2009 and early in 2010.

David Tennant first appeared as The Doctor in 2005 and has gone on to star in three series and three Christmas specials as the tenth incarnation of the Time Lord.

The BBC has confirmed that David will continue to play The Doctor in the four specials that will make up the 2009 series before a new Doctor takes over for Series 5.

Tennant will also star in the Doctor Who Christmas special, titled The Next Doctor, this year.

David Tennant comments: "I've had the most brilliant, bewildering and life changing time working on Doctor Who.

"I have loved every day of it.. It would be very easy to cling on to the Tardis console forever and I fear that if I don't take a deep breath and make the decision to move on now, then I simply never will. You would be prising the Tardis key out of my cold dead hand.

"This show has been so special to me, I don't want to outstay my welcome.

"This is all a long way off, of course. I'm not quitting, I'm back in Cardiff in January to film four special episodes which will take Doctor Who all the way through 2009.

"I'm still the Doctor all next year but when the time finally comes I'll be honoured to hand on the best job in the world to the next lucky git – whoever that may be.

"I'd always thought the time to leave would be in conjunction with Russell T Davies and Julie Gardner who have been such a huge part of it all for me.

"Steven Moffat is the most brilliant and exciting writer, the only possible successor to Russell and it was sorely tempting to be part of his amazing new plans for the show. I will be there, glued to my TV when his stories begin in 2010.

"I feel very privileged to have been part of this incredible phenomenon, and whilst I'm looking forward to new challenges I know I'll always be very proud to be the Tenth Doctor."

Russell T Davies, Executive Producer of Doctor Who, comments: ""I've been lucky and honoured to work with David over the past few years – and it's not over yet, the Tenth Doctor still has five spectacular hours left!

"After which, I might drop an anvil on his head. Or maybe a piano. A radioactive piano.

"But we're planning the most enormous and spectacular ending, so keep watching!"

David expands upon his decision in a taped interview which can be found at bbc.co.uk/doctorwho.

Doctor Who returns to our screens on BBC this Christmas. The Next Doctor starring David Tennant, David Morrissey and Dervla Kirwan will be screened on 25 December 2008 on BBC One.