Terror From Beneath The Earth Filming Halted By Gallstones 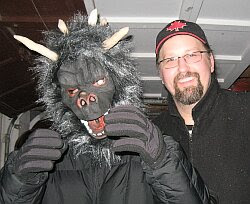 Filming on Christopher Mihm's latest monster movie, "Terror from Beneath the Earth!", had to be cancelled when one the cast came down with a bad case of gallstones. Mike Cook, who plays scientist Dr. Vincent Edwards in the film, was diagnosed with Cholelithiasis prior to the weekend shoot, which was scheduled to include scenes that involved his character. According to Mihm the scenes will be rescheduled, and shouldn't effect the films late Spring/early Summer release.

As for Cook, he has been resting at home and is on the mend.

Email ThisBlogThis!Share to TwitterShare to FacebookShare to Pinterest
Labels: Christopher Mihm, Movie, Sci Fi, Terror From Beneath The Earth, USA