Bloody Hell Nigel, I Think Our Sofa Is Haunted By Aliens 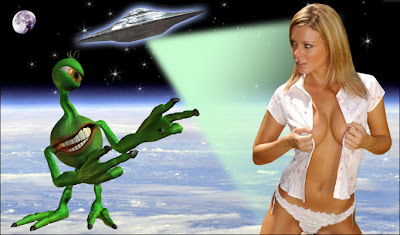 It isn't surprising that on the same day that it was published that more people in the UK believe in UFOs, Bigfoot and Ghosts than believe in God, that two utterly wacky reports like these would also make headlines.

First we have a couple in Bristol (UK) that believe that their family sofa is possessed by aliens, then secondly we have a report printed in The Sun about an Extra Terrestrial plot to abduct several of the newspapers sexy "Page 3 Girls."

Now, it is pretty obvious that the second article isn't meant to be taken seriously, but the first one is.

I would normally take the time to re-write these articles, but I honestly couldn't do them justice.

Now, a Brit family that is scared of their alien haunted sofa!

A Brit family is scared that aliens may have chosen a new abode in their sofa!

While Christine Strange, from Bristol, is scared that their family sofa may be alien haunted, her hubby Nigel has pledged to avoid sitting on it alone until it comes clean in investigations.

One Sunday morning I sat down on it with a cup of tea and suddenly heard this odd squeaky noise, the Sun quoted Christine as saying.

I thought I must be going mad but Poppy, my Yorkshire terrier, heard it too. She started sniffing around but then got scared and ran away.

It could be an alien for all we know. The noise is getting louder and louder. I'm scared its going to come bursting out one evening while were watching TV, she added.

As per the experts Britain has been badly suffering from the supernatural spell with Nick Pope, a former X Files expert for the MoD, adding: This is proving to be a really strange year. There are more UFO sightings and more reports of other weird phenomena than I can recall from any previous year. (ANI)

RANDY aliens are believed to be trying to abduct some of Britain’s most beautiful girls – as they target The Sun’s own Page 3 lovelies.

Martian chiefs are thought be telling their henchmen to enter the Earth’s atmosphere with instructiobns to “Beam me up totty” and only to capture the best-looking, most scantily-clad homosapians available.

It means The Sun’s beauties – the likes of Peta, 21, from Essex, Rosie, 18, from Middlesex and Amii, 22, from Birmingham – could be hit on by choosy extraterrestrials.

One of the Page 3 girls said: “We’re used to getting a lot of attention from a lot of men – but not from little green men with three eyes and tentacles.”

Dumbfounded experts previously thought that alien abduction was based on the chaos theory or something David Icke said – but, worryingly, many believe the pulling power of the UFO tractor beams could be too hard for many of the Page 3 crackers to resist.

Di James, picture editor for Page 3.com said: “We’ve always thought are girls are out of this world. This could prove it, literally ... but not in a good way.”

Brian from the department of UFO studies said: “I told them this would happen. We need to get Mulder and Scully involved. We need more funding.”

Another UFO fanatic said: “I want to believe.”

Silly Brits! Everyone knows that Aliens aren't in our furniture, they live in our TV sets. Also, The Aliens aren't after The Sun's "Page 3 Girls", they want Hugh Hefner's harem and the girls that write into "Penthouse Forum."

See Also: Nasa Photo Shows Human-like Figure On Mars / Ufologist Writes Letter To Obama Seeking The Truth / UFOs Blamed For UK Power Outage / Paranormal - Real Life Tales Of The Unexplained / UFOs Once Again Get Fighter Planes Scramblin Over Stephenville / Australian Musician Says Dot In Photo Is A UFO / A Turkish Security Guard Films UFO Multiple Times / UFO Spotted Over Slovenia - Another Photographed Over Dominican Republic / A Man In The UK Fears Alien Abduction After A Month Of Sightings / October 14th Is Here....And Surprise! No Aliens! / Aliens To Show They Are Real In The Skies Over Alabama
By Ken Hulsey at November 24, 2008