The Doctor Makes A Surprise Appearance On The Sarah Jane Adventures 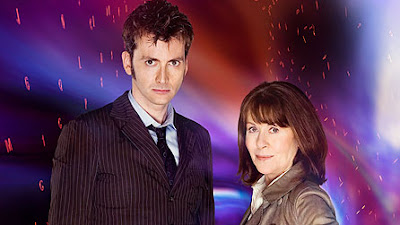 Doctor Who fans are in for a treat this Autumn as David Tennant makes a special appearance as The Doctor in CBBC's hit drama series The Sarah Jane Adventures with a starring role across two episodes.

Investigative journalist Sarah Jane Smith, one-time companion to that strange wanderer in time and space known as The Doctor, is reunited with her old friend as The Sarah Jane Adventures is back for a third series of alien-busting adventures on CBBC this September.

Elisabeth Sladen, who plays Sarah Jane, says: "When I heard the news that David was going to be joining us I was absolutely over the moon. Not only has it made my day but it will also make the viewers' day.

"It's fantastic news that Sarah Jane is going to spend some time working with The Doctor again and is testament to just how successful this CBBC series is."

Russell T Davies, Executive Producer of The Sarah Jane Adventures, adds: "Viewers thought they may have to wait until November for the next full episode of Doctor Who, but this is an extra special treat.

"And it's not just a cameo from David – this is a full-on appearance for The Doctor as he and Sarah Jane face their biggest threat ever."

The series includes 12 weeks of brand new adventures featuring a new alien race, the reptilian Veil and their enemies the Judoon, alongside an extraterrestrial girl that can make people play games against their will.

There will also be a living painting, the inhabitants of a supposedly haunted house, monsters who want to infect Earth with a strangely aggressive weed and a chance for Sarah Jane to find personal happiness with someone who could be the perfect person to complete her family.

Alongside adopted son Luke, Sarah Jane's team is made up of Luke's streetwise pal Clyde Langer, their schoolmate Rani, who lives opposite and has aspirations to become a journalist like Sarah Jane, and Mr Smith, their Xylok supercomputer up in the attic, plus Sarah Jane's robot dog, K-9.