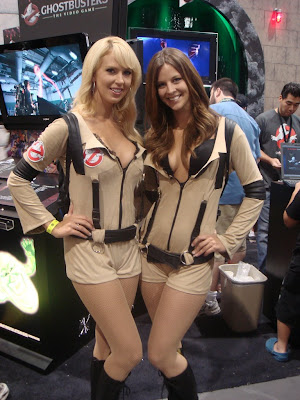 It's looks like Dan Aykroyd's vision of an all sexy female Ghostbuster team wasn't something actress Sigourney Weaver wanted to be a part of. Just under a month after the actress had been signed on to reprise her role as Dana Barrett in "Ghostbusters 3" she surprisingly backed out.

TVSquad.com caught up with Weaver who explains, "I think they're trying to create something new completely with the Ghostbusters, although I know Bill is in it. I don't expect to have anything to do with it, although I wish them well."

I believe that it is safe to assume, that since Weaver had signed on to be in the film at about the same time that Aykroyd began talking about his all female "Ghostbusters", that she didn't quite know what she was signing on for. It looks as if the actress didn't agree with the direction that the movie series is about to take.

If indeed Sigourney Weaver backed out of "Ghostbusters 3" because she didn't want to be part of 'jiggly movie', then I don't blame her. Aykroyd's all sexy female ghost fighting team idea.....well......kinda sucks.

See Also: An All Girl Ghostbuster Team? - Say It Isn't So Aykroyd! / Mega Shark vs Giant Octopus - The Deborah Gibson Interview / It's Not Ghostbusters 3...It's A French Car Commercial / Ghostbusters 3 Behind The Scenes Footage......Maybe? / Ghostbusters 3 Is In The Early Stages Of Production?
By Ken Hulsey at June 30, 2009