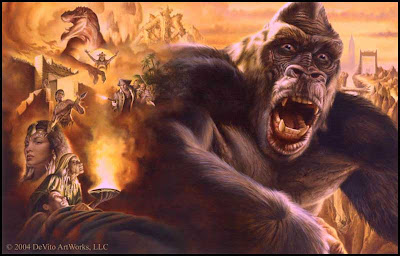 Is there a more iconic monster in the history of American pop-culture than "King Kong"? Arguably not. The movie monster was a gigantic box office success back in 1933 and inspired countless movie makers around the globe, who-in-turn, went on to create their own iconic monster creations.

Indeed Kong will never die in the hearts and minds of movie fans and movie makers for decades to come.

Presently Spirit Pictures is working on a sequel/prequel to the classic film "King Kong" based on Joe DeVito and Brad Strickland's novel "Kong: King of Skull Island". The story takes place some twenty-five years after the monsters iconic fall off the Empire State Building, but ultimately tells the story of Kong's origins.

Here is a synopsis of the story from the book:

The story begins in 1957, twenty five years after King Kong’s fall from atop New York City’s Empire State Building. Following Kong's death, both Carl Denham and the body of Kong quickly vanished before any investigation could be launched, leaving rumor and speculation in their wake. Carl's son, Vincent, was left behind. He is now a paleontologist facing a spiritual dilemma, which has its seeds in the disappearance of his father. Upon a chance finding of the hidden Skull Island map, Vincent contacts Jack Driscoll, one of Kong's original captors. They piece together a plan and go to Skull Island in search of Carl Denham, King Kong, and an answer to questions spanning a quarter century.

During a disastrous landing attempt, Vincent is almost killed and Driscoll sets out to find his stricken friend. Upon waking in a dark cavern, Vincent finds himself being cared for by an enigmatic island elder and her young, exotically beautiful but ominous assistant, Kara. The ancient woman, who asks to be called "Storyteller," seems to possess extraordinary knowledge about Vincent and his father. She relates a story from a century earlier that Vincent half-hears and half-dreams through the haze of narcotic herbs kept burning to aid his recovery. Her tale hints at the true origin of the island’s culture and the mystery behind questions such as: Who built the Wall and how? If the Wall was built to keep Kong out, why are its doors big enough to let him in? How could such an island and its monstrous creatures still exist? The answers to those questions and more are all revealed.

While the Storyteller’s tale is sometimes confirmed, it is often refuted by the sights and experiences of Jack Driscoll. He stumbles upon pieces to Skull Island’s primordial history as he struggles to survive the various threats of the island and find his friend. When Driscoll and Vincent reunite, their experiences combine to determine just who the Storyteller and Kara are, what became of Carl Denham, the story behind King Kong and clues to the origins of Skull Island itself. As a result, their lives are all changed forever.

As the story unfolds against a fantastic prehistoric backdrop, woven throughout are themes of personal redemption and reconciliation. All the protagonists have a particular cross to bear: Vincent is on the brink, both emotionally and spiritually; Driscoll comes face to face with past fears and prejudices; in the wake of Kong's death, the lives and culture of the islanders themselves hang in the balance; and we find that Carl Denham's desperate attempt to assuage his conscience decades earlier had very unexpected consequences…

Mysteriously, everyone is inextricably bound to the Storyteller’s ancient tale. It tells of Islanders Ishara and Kublai, and their quest to escape a terrible fate which threatens both themselves and their people. That struggle has the power to reach across time and change the destiny of all - if they survive. For at the nexus of every event is the beast-god of Skull Island: KING KONG.

Sounds like a pretty cool story to make a film out of.

Details on this one are still a bit sketchy, but so far the producers have stated that it is planning on using state-of-the-art motion capture technology to create Kong and the other prehistoric residents of Skull Island.

Presently one of the production companies involved, Fantastic Films International, has the film listed as "King Kong: The Beginning" on their website. No word yet whether that is a 'working title' or not.

Also on a side note, it is the estate of Merian C. Cooper, not Universal Studios, who own the rights to "King Kong", contrary to popular belief.

This is the main reason why there have been so many Kong related films produced over the decades including, "Konga", "Queen Kong", "King Kong's Fist", "King of Kong Island" and "King Kong Lives."

Here are some illustrations from the novel "Kong: King of Skull Island: 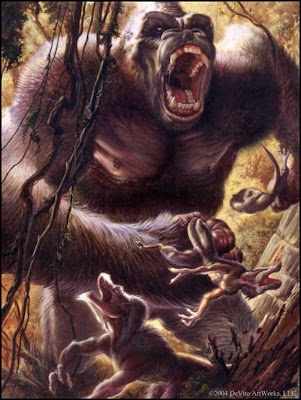 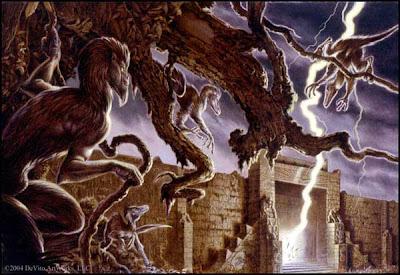