Jennifer's Body - Making A Movie And A Monster 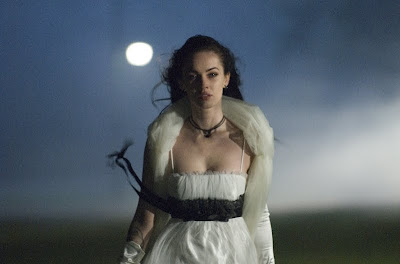 No matter how wild the on-screen action, the filmmakers were determined to infuse JENNIFER'S BODY with a realistic, naturalistic look. "As much as I love beauty in movies, it's also important that there be some kind of fundamental honesty in the design choices," notes directer Karyn Kusama. "Even if you push it and go a little over the top, which I hope we did with this movie in a positive way, there's still something truthful about it."

"My initial dialogue with Karyn was basically how to get the hyperbole of horror into this fairly mundane, Midwest setting," notes production designer Arv Greywal. "While doing some location scouting, we saw a swimming pool that was almost overgrown with vines, so we took that another step and there are literally thousands of running feet of vines in our pool set."

Nature is a major visual design thematic in the film. There are plant motifs in the girls' bedroom wallpaper, an artificial forest of denuded trees at the school dance, and a mossy tree stump serves as Jennifer's sacrificial alter. "Nature symbolizes the wild forces that are uncontrollable, the supernatural, the primal emotions that permeate this story," says director of photography M. David Mullen. "We're constantly seeing this wild, untamed nature, which gives the film a kind of fairytale quality."

Also embedded in the design is a macabre kind of natural science that portends the visceral experiences to come. "In the girls' biology class we see models of human intestines and lungs. We also have a possum in a jar of formaldehyde," notes Greywal, whose first production design assignment was horror maestro George Romero's "Land of the Dead." "There are some design themes that we draw on from classic horror movies, and we're quite overt about it in certain instances. At the pool, there's a pile of trash and the objects are all visual cliches from old horror movies, cradles, wheelchairs, broken mirrors, chandeliers, for instance."

The film's offbeat sensibility and varying types of humor were key considerations. "Sometimes we're working with a kind of deadpan humor, other times it has a macabre quality. Sometimes the humor's in the dialogue, sometimes it's in the situation, the set-up, or the image itself," Mullen explains. "Over the course of the story we travel from naturalism to expressionism. As things go more and more wrong for the characters, the lighting gets more shadowy, and things get more extreme in terms of contrast and mood. We could justify it because it's a story where almost anything is possible." 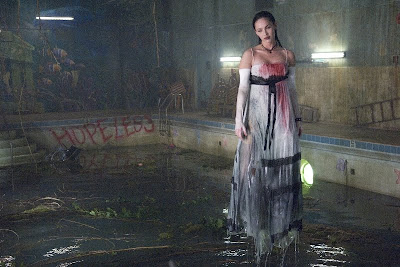 Over the course of the story, Jennifer transforms from a glittering beauty into a pale and sickly creature. Jennifer's wan look had the suntanned Megan Fox making every effort to avoid the gym and the sun. "Coming off of 'Transformers,' I was really healthy," says Fox. "I was working out all the time, and I was often at the beach. When I took on JENNIFER'S BODY, I stopped going outside so I could approach Jennifer's demon-esque coloring. I never left my house. I actually started becoming physically what she becomes."

When Jennifer feeds, her facial features transform into a hideous maw. This is achieved in a sequence of shots that showcase the artful marriage of prosthetic make-up and visual effects. "Jennifer's jaw becomes unhinged, her cheeks rip open and the inside of her mouth fills with teeth as she attacks her victims," explains VFX supervisor Erik Nordby. "Because we have a mandate to do as much as we can on camera, our makeup effects team, Greg Nicotero and Mike Fields, took the lead on developing this signature sequence. They designed the overall look that informed our approach, which entailed a series of passes with every pass fulfilling a role in what became the final shot."

"Megan has a pair of fang-like dentures that she wears in the feeding sequences," adds makeup effects artist Mike Fields. "We also had a double who wore an extended jaw and neck prosthetic, and repeated Megan's action on a separate pass. The double's prosthetic was painted green so it could be manipulated in post-production. I then stepped in with the full prosthetic puppet head for a reference shot to give visual effects the full range of motion of the jaw."

JENNIFER's jaw - and the rest of her BODY - arrive in theaters everywhere September 18.