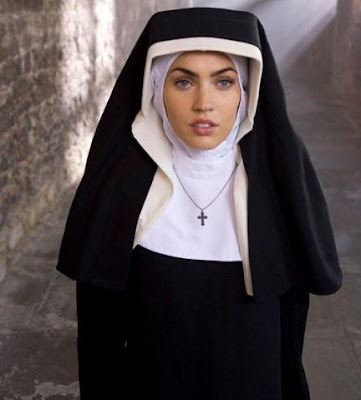 Okay, right out of the gate I know what your gonna say, "The Weekly World News, Ken, are you kidding me?" I know, I know, but on this one it is hard to tell if this is one of their usual stories, which is total 'bull biscuits', or if they actually have a scoop?

Of course, I think its all made up, but regardless, it sure is funny.

According to sources, Weekly World News sources, actress Megan Fox has filmed a special digital short for the season premiere of "Saturday Night Live", which is set to air this weekend.The clip is reportedly a spoof of her current film, "Jennifer's Body", and her upcoming role as Mother Theresa in the comedy, "How To Lose Friends and Alienate People."

Now, here is an except from an early draft of the script:

Megan Fox dressed as a nun walking through the streets of New York, set to the song Sadness by Enigma.

In a slow motion shot, Fox recreates her famous scene from Jennifer’s Body by climbing naked on to a dock out of the East River. Disavowing the power of her sexiness, she puts on a nun’s habit as the music swells. Fox begins blessing the unfortunate while walking through the streets of New York City. She takes pity on homeless men, poor women and socially awkward teens, her blessings magically transforming them into religious backup dancers. They have a dance number in Times Square, but it is cut short when Godzilla comes out of the Hudson.

Realizing she is the city’s only hope, Megan Fox the Nun throws off her habit and reaches out to her holy backup dancers, and together they form Fox-atron. Fox-atron is a Metropolis-inspired giant Megan robot. In this costume Fox does battle with Godzilla on a miniature set of New York City. After defeating the monster and pinning him to the ground, Fox-atron makes out with Godzilla, while Sadness cues back up and they fade to black.

Too weird to be true? Well, not really I suppose, this is a comedy show after all.