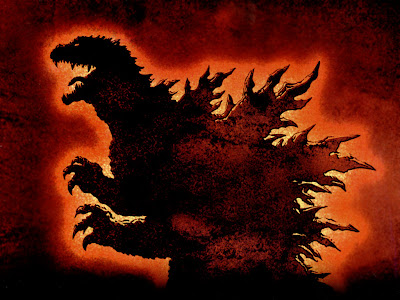 It seems that I may have been duped? Earlier today I posted an article about the possible hiring of Keith Melton as the director of Legendary Pictures/Warner Bros upcoming "Godzilla" movie.

Now, that I have had time to do some research, it seems that this report was in error......or was it? Frankly, I'm not sure, there seems to be some confusion.

Now, first off, my source for the Melton hiring, was IMDB, which I have learned from fans, is about as reliable a source for movie info as a drunk at a party.

So, I was naive there.

Let me explain a bit. While searching for news on "Godzilla 2012" I happened to stumble upon the IMDB listing for "Godzilla 3-D". The page listed the film as 'In Development', it's release date as 2012, and Keith Melton as director. Certain that I had stumbled upon the page for the Legendary Pictures "Godzilla" movie, I posted the info.

What it seems that I did find, is the modified page for Yoshimitsu Banno's "Godzilla 3D to the Max" film.

Unknown to me, at the time, Melton was attached to direct that film.

So, I'm sure at this point that I screwed up 'BIG-TIME'!

Still, I have to wonder why the page for the "Godzilla 3-D" film has been updated to now list 2012 as it's release date.

Adding to this confusion is an article I also read this morning that states that a 60-minute, 3D, IMAX Godzilla movie will be released in early 2011. That info was included in a piece about upcoming 3D movie projects that also talked about Legendary Pictures 2012 Godzilla movie.

So what gives? Is Yoshimitsu Banno's 3-D Godzilla movie still on? Is Melton directing it? WTF!

Adding to this ball of confusion, is the fact that Melton's IMDB bio also lists "Godzilla 3-D" as his next film, with a notation that it is 'in development'.

I also just discovered another page on IMDB for "Godzilla (2012)". That page doesn't have any director listed for it, and is also listed as 'in development'. My money is on this one being for the Legendary Pictures "Godzilla" movie.

Here are the possibilities, as I see them. One, since Yoshimitsu Banno is a producer on Legendary Pictures "Godzilla" movie, both the "Godzilla 3-D" and "Godzilla 2012" pages on IMDB have been merged somehow, that would explain the 2012 date for both.

Another far-fetched possibility is, that since Banno is on board, Legendary Pictures fronted him some money to produce "Godzilla 3-D" and it is now a go, with Melton at the helm. Maybe both films will be released in 2012, together?

Truth is, all of this stuff is just rumor, conjecture, and guessing. Odds are, all of it is just a bunch of misinformation posted on IMDB by God knows who.

If any of this turns out to be true, well, I for one will be surprised.

The only reason that I bring any of this up, is the however slight possibility that there may be a grain of 'real' news in there somehow.

Such is the job of reporting on movie projects, there is just so much information out there, that turns out to be false. It is really hard to figure out what is the lies, and what is the truth.

You also need to understand that back in the day, IMDB was a 'rock-solid' source for accurate information. Now, I guess that things have changed.

I'll try not to get too worked up by any more changes to these pages. Lesson learned, I suppose.