Luckily There Is Hope For All You Wayward Sinners, Godzilla Saves! 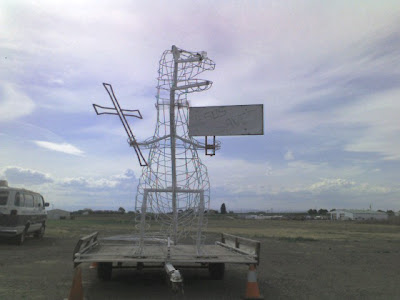 Bow down and prepare to receive the cleansing radioactive breath of the "King of the Monsters" all ye of true faith.

Though the local Nazarene church in Zillah, Washington is called the "Church of God-Zillah", to my knowledge, none of their flock have renounced their faith and begun worshipping 55-meter-tall monsters from Japan.

I said, to my knowledge.

Regardless, the church has been more than happy to cash in on the fact that "Zillah" sounds like "(God)Zilla" and have erected a wire-frame float of the monster, complete with cross and a sign that says "Jesus Saves", in the parking lot. One can only assume that one day the thing will be covered in green scales to look more like the original.

According to the church, they began using the name "God-Zillah" long before Godzilla ever stomped throuh Japan. As for the town, it too was named way before the horrors of radioactivity unleashed giant creatures upon mankind, in 1892, not for any dinosaur, but for Miss Zillah Oakes, daughter of Thomas Fletcher Oakes, who was president of the Northern Pacific Railway at the time.

Who would name their daughter "Zillah"? I guess when your a big railroad tycoon you can name your kids anything that you want, and who will argue?

Even though the town, and the church were named first, I suspect that when Toho's lawyers get wind of this, they will still file a suit.

Now I lay me down to sleep. I pray Godzilla my soul to keep, and if I die before I wake. It will probably be the monsters fault. - Japanese proverb