The kaiju world is abuzz at the prospect that Gojira (i.e., Godzilla) (1954) will receive a DVD/Blu-ray restoration treatment from Criterion.

Classic Media released a subtitled Japanese version along with the Americanized Godzilla, King of the Monsters! DVD set a few years ago that received a lot of kudos from fans. Having both movies released and restored by Criterion would be the icing on the cake.

Now, there's word that a fine-grain 35mm print of Godzilla, King of the Monsters! has been found. August Ragone has details on this at his blog.

The last version of Godzilla, King of the Monsters! was the closest thing to a restored print released (by Classic Media) to date, but it was pieced together from several sources and some items were edited in out of original order.

Having a fine-grain print available (provided it is still in good shape) on DVD would be tremendous! (August Ragone explains why.) 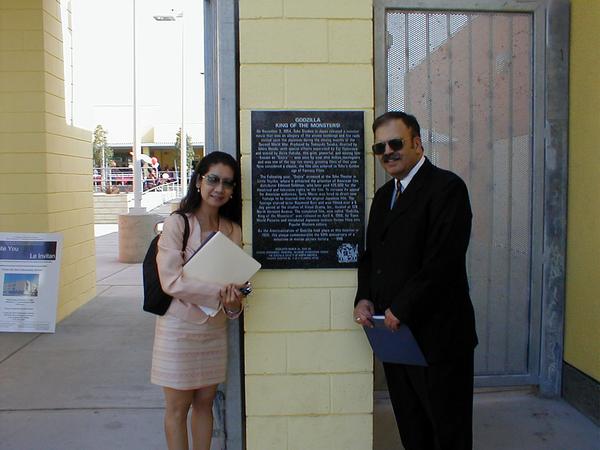 Above, the "Godzilla King of the Monsters! plaque at Frank del Olmo Elementary School in Los Angeles.

Godzilla, King of the Monsters! was the edited version by Terry Morse that featured Raymond Burr and was filmed at Visual Drama Studios in Los Angeles in 1956. A commemorative plaque has been placed at the location (now an elementary school).

It'll be interesting to see what transpires!