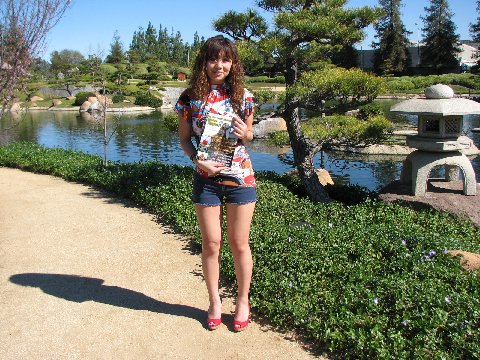 Above, Miki Hayashi with "The Monster Movie Fan's Guide To Japan. Photo by Armand Vaquer.

The Monster Movie Fan's Guide To Japan is prominently mentioned in Facts and Details's page on Godzilla. My interview with The Daily Yomiuri is extensively quoted.

Also included is a photo of the premiere of Godzilla, Mothra and King Ghidorah: Giant Monsters All-out Attack (2001) that I took.

It is interesting that Godzilla is referred to as "her."

Facts and Details is run by Jeff Hays, who describes himself:

I am a teacher and writer currently living in Saga, Japan. I was born in the Mojave Desert in California and brought up mostly in Reston Virginia, in the Washington D.C. suburbs. I graduated from Wesleyan University in 1979 and later took courses to be a high school teacher. Over the years I wrote about rock music and had some pieces published in the Washington Post, the NME, The Face and other publications, wrote a guide about sports in the Washington D.C. area, worked construction, did a stint as bike messenger in D.C. but mostly I have worked overseas as an English teacher—at an elementary school in Istanbul, language institutes and a university in South Korea, as a freelancer in Barcelona and for the last 10 years or so running my own little informal school in Japan. Being an English teacher is not a very high status job but it does allow one to travel around and has given me ample free time to pursue the website project that you see here.

There is a misquote. It was posted: "One place he didn’t visit, Vaquer told The Daily Yomiuri, was New York City, dismissing the monster in the 1998 U.S. film as GINO ("Godzilla In Name Only")." During The Daily Yomiuri interview, it was discussed that New York City wasn't included in the travel guide since it was only for locations in Japan. Fans are aware that the real (Japanese) Godzilla did pay a visit to New York City in Destroy All Monsters.

To view the site, go here.