New Line Cinema Is About To Go On A RAMPAGE 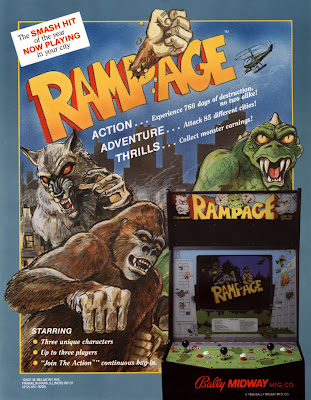 There are two relatively new trends in Hollywood that are starting to gain some steam, one the reemergence of the giant monster genre and second the development of classic video games into movies. That being said it was only natural that New Line Cinema would opt to combine both with the development of the 80s video game "Rampage" into a feature film.

For those of you too young to remember "Rampage" is a rather simple video game where the player controls one of three giant monsters, one a Godzilla-like dinosaur, another a giant Kong inspired gorilla and lastly a werewolf who begin as normal humans that mutate. The three giant creatures can smash the crap out of buildings, stomp on tanks and swat planes out of the sky for points. The more you smash the higher the score. Need more energy ... just munch on some screaming townspeople.

Not really much there, except possibly conceptually, for a movie plot. Then again you could get the same inspiration from any of a hundred monster movies made from 1930 on.

John Rickard (Horrible Bosses and Final Destination 5) is in line to produce the film which New Line wants to be something like "Ghostbusters and Independence Day". In other words a comedy about three people who mutate into giant monsters and blow up the White House ... or something along those lines.

Rampage is a 1986 arcade game by Bally Midway. Players take control of gigantic monsters trying to survive against onslaughts of military forces. Each round is completed when a particular city is completely reduced to rubble.

Up to three simultaneous players control the monsters George (a King Kong-like gorilla), Lizzie (a Godzilla-like dinosaur/lizard), or Ralph (a giant werewolf), created from mutated humans. When they were humans, George was a normal middle aged man, Lizzie was a young woman, and Ralph was an elderly man. They were experimented on at Scumlabs. As monsters, they need to raze all buildings in a high-rise city to advance to the next level, eating people and destroying helicopters, tanks, taxis, police cars, boats, and trolleys along the way.

Monsters can jump and climb buildings, and punch enemies and buildings. Buildings also take damage when jumped on by a monster. The player's monster receives damage from enemy bullets, grenades, shells and so forth, and from falls. Damage is recovered by eating appropriate food such as fruit, roast chicken, or soldiers. If a monster takes too much damage, it reverts back into a naked human and starts walking off the screen sideways, covering its genitals with its hands. While in this state, the player can be eaten by another player. If the player continues, the human mutates back into the monster, or flies in on a blimp if off-screen, with a full life bar.

Smashing open windows generally reveals an item or person of interest, which may be helpful or harmful. Helpful items include food or money. Dangerous ones include bombs, electrical appliances, and cigarettes. Some items can be both; for example, a toaster is dangerous until the toast pops up, and a photographer must be eaten quickly before he dazzles the player's monster with his flash, causing it to fall. When a civilian is present waving their hands out a window signaling for help, a player's points meter rapidly increments when the civilian is grabbed. Each player can hold only one type of person: George can hold women, Lizzy can hold men, and Ralph can hold businessmen.

Rampage is set over the course of 128 days in cities across North America. The game starts in Peoria, Illinois and ends in Plano, Illinois. In Plano, players receive a "mega vitamin bonus" which heals all the monsters and provides a large point bonus. After this, the cycle of cities repeats five times. After 768 days, the game resets back to Day 1. - From Wikipedia