Shopping For Toys In Tokyo

One of the things that attracts fans of Japanese science-fiction and fantasy movies to Japan is to fill in gaps in their collections of character toys and movie memorabilia.

There are two sections of Tokyo that are my favorite sources for collectibles.

The Nakano section of Tokyo is one major source for monster goods.  Near Nakano's JR Chuo Line station (north exit) is the Broadway Mall.  In the mall (in the upper floors) are several stores of Mandarake.  Each store specializes in genre collectibles.  One store would specialize in manga.  Another would specialize in toy collectibles.  I last went there in December 2010 and purchased a porcelain figure of "Nipper," the RCA Victor dog ("His Master's Voice"). 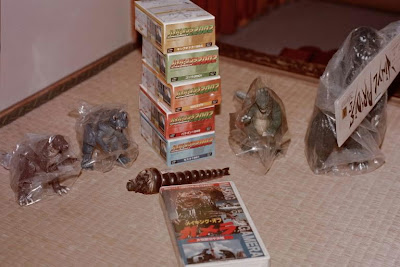 Over the years, I've made many purchases of Godzilla and Gamera-related toys at Mandarake.  (See page 26 in The Monster Movie Fan's Guide To Japan.)

Also, the Broadway Mall (third floor) has another store that specializes in kaiju toys and collectibles, Robot Robot.  Both Robot Robot and Mandarake sell used as well as new toys.

More recently, I found a toy store right on Nakamise Street in Asakusa that sells kaiju collectibles.  And, on a side street off of Nakamise Street, is another toy store where I've purchased kaiju toys.  It is right next door to a McDonalds restaurant (photo below), which makes finding it easy. 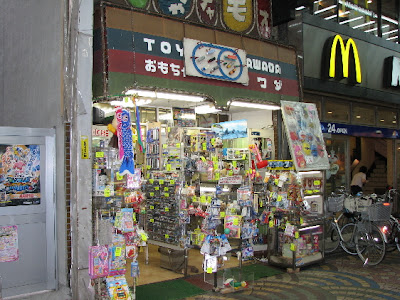 The nice thing about purchasing kaiju toys in Japan is that the prices are reasonable, whereas, U.S. importers greatly jack-up the prices.  There are other places in Tokyo where fans can buy collectibles.  Akihabara is a mecca for otaku.

For Ultraman collectibles, the Rox department store in Asakusa is the place to go.  A statue of Ultraman stands at the store's entrance (photo below). 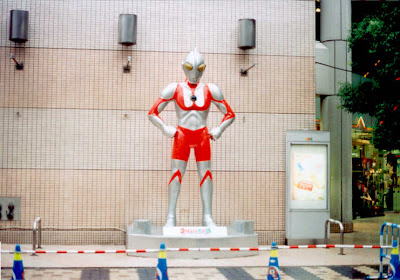 And, in the Setagaya district of Tokyo, Ultraman goods can be found at the Ultraman Shopping District (Ultraman characters adorn storefronts and lamposts). See page 22 of The Monster Movie Fan's Guide To Japan.

For more information on the Broadway Mall, go here.