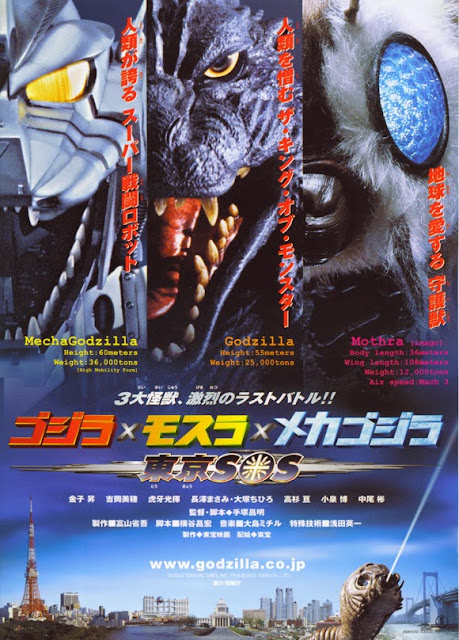 Next month (December 13, to be exact), will mark ten years since the release in Japan of Godzilla x Mothra x Mechagodzilla: Tokyo S.O.S., the 27th entry in Toho Co., Ltd.'s Godzilla series.

The movie pretty much picks up where Godzilla x Mechagodzilla (2002) left off with Mechagodzilla undergoing repairs after its battle with Godzilla in the prior movie. 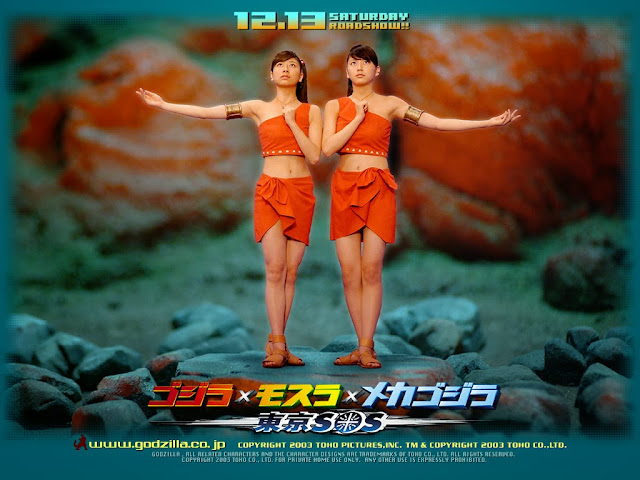 My first screening of Tokyo S.O.S. was at the American Film Market (at Toho's invitation) in Santa Monica. At the time, I was a bit underwhelmed by it and found it to be disjointed at times. But, the movie has grown in (my) esteem over the years. It is a fun romp of monster action. The acting was so-so with the male lead having some rather boring personal issues. The stronger characters were the women in the movie: Miho Yoshioka as a fighter pilot and Masami Nagasawa & Chihiro Otsuka as Mothra's Shobijin. Hiroshi Koizumi reprises his Mothra (1961) role as Dr. Shin'ichi Chûjô.

Amazingly, the movie features superb special effects despite having a sliced budget.

The movie was later released on DVD in the United States as Godzilla: Tokyo S.O.S. While in Japan in 2004, I picked up the Region 2 Toho DVD of the movie, which included a bonus item: a claw made by Shinichi Wakasa's monster suit company. The bonus was exclusive to HMV record and video stores in Japan, I was told.

The next (and 28th and last) entry in Toho's Godzilla movie series was Godzilla Final Wars (2004), which received mixed reviews by fans. At the time of Godzilla Final Wars release, Toho announced that they would be putting Godzilla on an extended 10-year hiatus due to dwindling box office receipts.

Next year, we will see the release of Godzilla by Legendary Pictures and Warner Bros., just in time for Godzilla's 60th anniversary.
By Armand Vaquer at November 20, 2013