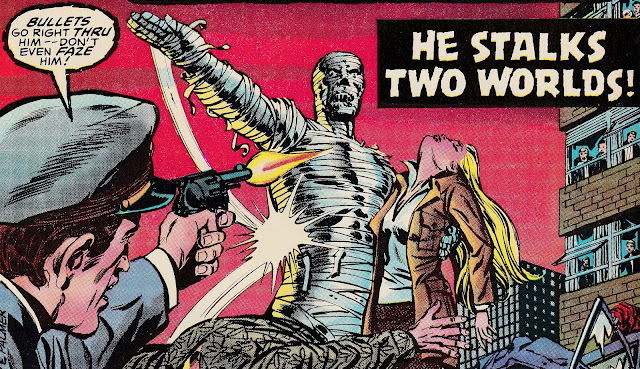 Power Times Four!, script by Tony Isabella, art by Val Mayerik; N'Kantu is transported to the Elementals, four former rulers of Earth that wish to return; They make the mummy their slave and teleport him back to earth to destroy a scarlet scarab--an ancient weapon of magic capable of destroying them. The Little Gypsy Tea Room, script by Stan Lee, art by Steve Ditko; A criminal forces a gypsy to hide him from the police, but gets more than he bargained for when she does help him.

Of course we have The Living Mummy In Stock ... Go Check Him Out 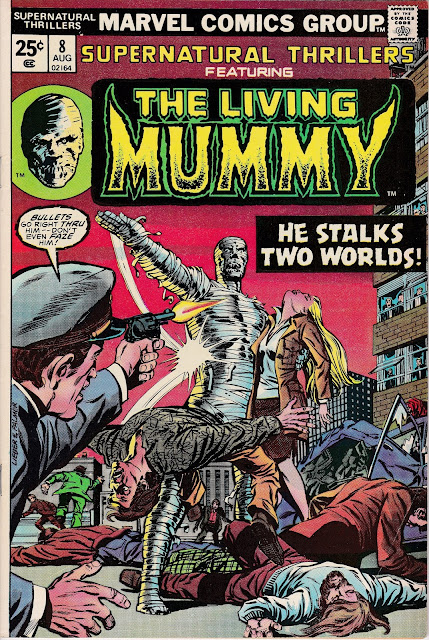 Born 3,000 years ago, N'Kantu is the son of T'Chombi, a chief of a Northern African tribe called the Swarili of the nation of Swarilis. At the age of 21, N'Kantu must undergo the Test of the Lion, proving himself to be worthy of being called a warrior. Succeeding in this trial also means that someday N'Kantu would be worthy to succeed his father as king. Months later, his father dies in his sleep, and N'Kantu becomes the chieftain of the Swarili tribe.

Returning from a hunt, N'Kantu finds that his village has been ransacked and the entire tribe of Swarili rounded up by Egyptians as slaves. N'Kantu fights to rescue his people, but is overwhelmed and captured by the Egyptian soldiers.

N'Kantu and the Swarili are then taken to Egypt, and put to work building monuments to the current Pharaoh, Aram-Set. Recognized as the strongest, and most dangerous of the Swarili, N'Kantu is isolated and forced to work the hardest in an attempt to break his spirit. But at night he and the other Swarili people plot a rebellion, though unbeknownst to them their plotting is being reported to Aram-Set and his chief priest, Nephrus. At the completion of the current monument project, the Egyptians take their slaves into its catacombs in preparation for a mass execution. But N'Kantu signals for the revolt and the Swarili slaughter their would-be executioners.

N'Kantu slays Aram-Set with his spear and then turns to Nephrus, but the evil priest had prepared, and he sprays N'Kantu in the face with a mysterious paralyzing liquid. N'Kantu is then strapped and bound to a special altar, his body wrapped in papyrus, and his blood is drained and replaced with an unknown alchemical preservative. N'Kantu, who remains conscious through the entire ordeal, is then placed inside a stone sarcophagus.

In modern times, the paralyzing fluid finally wears off and N'Kantu escapes from his tomb. Deranged from being paralyzed in a dark tomb for several millennia, he digs himself free and goes on a rampage in Cairo, Egypt. He later recovers from his insanity and discovers Doctor Alexi Skarab, one of Nephrus' surviving descendants. N'Kantu was electrocuted into unconsciousness. His lifeless body is shipped to a New York City museum, where he is revived. He is teleported to the dimension of the Elementals, who ordered him to find the ruby scarab. While searching, he battled Professor Abdol the Living Pharaoh. N'Kantu then battled the Elementals, and vanquished them with the aid of the Scarab he had found. During later travels N'Kantu befriends Ulysses Bloodstone. Some time after that N'Kantu is kidnapped by the Grandmaster for the Contest of Champions, but the Grandmaster doesn't consider him worthy enough to be a combatant and so N'Kantu returns to Earth.