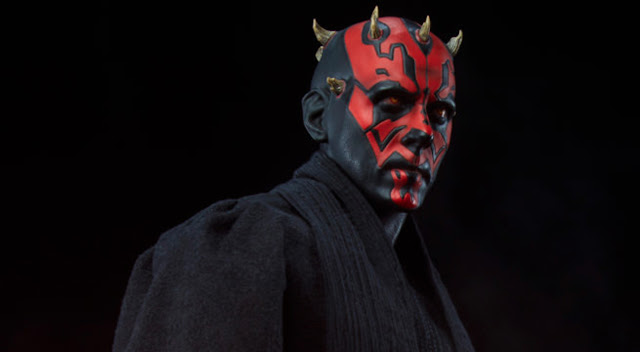 The appearance of Darth Maul in "Solo" blew my mind. I sure hope they make the rest of this trilogy!

From The Express (UK)
By Shaun Kitchener

Towards the end of the recent Star Wars spin-off, the iconic villain from Episode I: The Phantom Menace is revealed as the mysterious superior to Dryden Vos (Paul Bettany), who by that point had been killed by Qi’Ra (Emilia Clarke).

Clarke is then summoned to see him, at which point the film ends.

Speaking to ET Canada, Ehrenreich said the cast and crew were not informed of Maul’s cameo until incredibly late in the process.

“Late,” he said. “Like, when we were going back and doing a few pick-ups.

“There was a part in the script where it said somebody appears but it didn’t say who, so there was speculation among the cast and crew over who it was gonna be.

“Everyone was kind of talking about it. There were a lot of rumours.”

Asked about how he would like any future sequels to play out, the actor said he just wants to share the screen more with Clarke and Donald Glover.

Sequel news has not been confirmed by LucasFilm just yet, possibly because of the negative press swirling around Solo’s box office.

Although its haul of just under $180 million in the US is good by many film’s standards, it’s substantially lower than the number it needed to make to break even. It’s also, by a long shot, the worst-performing Star Wars film since Disney took over LucasFilm.

For now, the only Star Wars film officially in the diary is Episode 9, the conclusion of the Skywalker saga - due in cinemas in late 2019.

Rian Johnson is also working on a trilogy, as are the Game of Thrones showrunners.


Find out more in Movie News