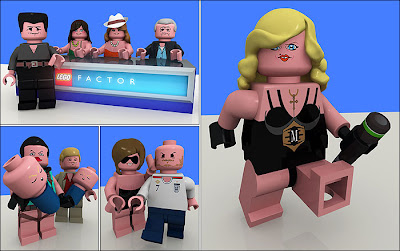 Lego has decided to capitalize on celebrity fame to celebrate the 30th anniversary of their line of miniature plastic "Lego People." The Danish based toy manufacturer who has built an empire on little plastic bricks, has designed several of these UK and International celebrity miniatures with the likenesses of such paparazzi favorites as, Madonna, David and Victoria Beckham, Amy Winehouse, The Judges from the UK series X Factor, and Angelina Jolie and Brad Pitt (with adopted little ones!).

Unfortunately for Lego collectors and celebrity obsessed nut-jobs, these little people won't be for sale to the general public.

Hey, at least these little plastic celebrites won't have to spend time in rehab, or force their crazy political views on us. Actually now that you mention it, I like the Lego versions better. Any chance of replacing the real deal with the plastic ones? Would anyone notice?!
By Ken Hulsey at September 18, 2008