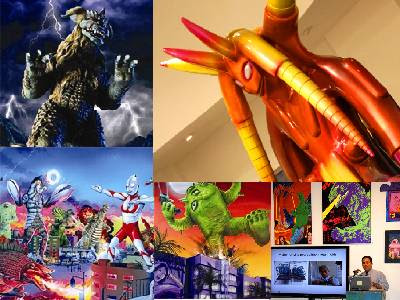 Anyone who doubts the influences of Japanese monster movies on popular culture should take a good look at a current exhibit at the Art Center of South Florida. The exhibit, entitled, "Kaiju Monster Invasion: Miami Beach" features vinyl figures, statues, toys, paintings and other various forms of art inspired by Godzilla, Gamera, Ultraman and all their friends. The works on display were created by Pop Surrealists from around the globe, including Coop, Ron English, Mark Nagata and Skot Olsen.

I have to admit that this one flew under my radar. The exhibit opened back on December 2nd, but fear not. There is still time to check it out. "Kaiju Monster Invasion: Miami Beach" (Curated by Harold Golen) runs until January 4th, 2009.

Here is the official info:

This is exhibition featuring Japanese monster-inspired interpretations by renowned contemporary western and eastern artists. The Japanese word Kaiju, which translates to “strange beast” or “monster”, first emerged in post-war Japan in the 1950s and 1960s. After experiencing the Atomic Bomb, Godzilla (a radioactive lizard) and Gamera (a giant flying turtle) became the mutant brainchildren of anti-nuclear cinema. Now a half-century later, Lowbrow and Pop Surrealists including Coop, Ron English, Mark Nagata and Skot Olsen have been inspired by and amassed their very own collections of the famed vinyl monsters.

I just love that painting of "King Ceasar". I wonder if the artist will ever sell prints of it?